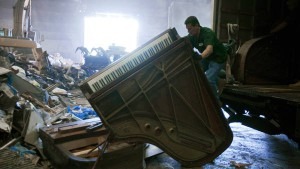 A Requiem for Pianos: O’Mara Meehan Piano Movers has been in the business since 1874. The vice president, Bryan O’Mara, laments the fact that he has to dispose of 5 to 10 pianos a month.

SOUTHAMPTON, Pa. — The Knabe baby grand did a cartwheel and landed on its back, legs poking into the air. A Lester upright thudded onto its side with a final groan of strings, a death-rattling chord. After 10 pianos were dumped, a small yellow loader with a claw in front scuttled in like a vicious beetle, crushing keyboards, soundboards and cases into a pile.

The site, a trash-transfer station in this town 20 miles north of Philadelphia, is just one place where pianos go to die. This kind of scene has become increasingly common.

The value of used pianos, especially uprights, has plummeted in recent years. So instead of selling them to a neighbor, donating them to a church or just passing them along to a relative, owners are far more likely to discard them, technicians, movers and dealers say. Piano movers are making regular runs to the dump, becoming adept at dismantling instruments, selling parts to artists, even burning them for firewood.

“We bust them up with a sledgehammer,” said Jeffrey Harrington, the owner of Harrington Moving & Storage in Maplewood, N.J.

Pianos consist of hundreds of pounds of metal, wood and intricate machinery able to channel Bach, Mozart and Beethoven, along with honky-tonk, “Happy Birthday” and holiday tunes. It is strange to think of them as disposable as tissues. Yet economic and cultural forces have made many used pianos, with the exception of Steinways and a few other high-end brands, prone to being jettisoned.

With thousands of moving parts, pianos are expensive to repair, requiring long hours of labor by skilled technicians whose numbers are diminishing. Excellent digital pianos and portable keyboards can cost as little as several hundred dollars. Low-end imported pianos have improved remarkably in quality and can be had for under $3,000.

“Instead of spending hundreds or thousands to repair an old piano, you can buy a new one made in China that’s just as good, or you can buy a digital one that doesn’t need tuning and has all kinds of bells and whistles,” said Larry Fine, the editor and publisher of Acoustic & Digital Piano Buyer, the industry bible.

Used pianos abound on Web sites like eBay, driving prices down and making it difficult to sell Grandma’s old upright. With moving costs of several hundred dollars, even giving a piano away can be expensive. Abandonment often becomes the only option, especially for heirs dealing with a relative’s property.

Many pianos are also dying of old age. In the late 19th and early 20th centuries, before radio and recordings, pianos were the main source of music, even entertainment, in the home. They were a middle-class must-have.

Piano dealers also blame other changes in society for a lack of demand in the used-piano market: cuts in music education in schools, competition for practice time from other pursuits, a drop in spending on home furnishings with the fall of the housing market.

Whatever the reason, people in the piano world agree that disposals are mounting.

O’Mara Meehan Piano Movers said it takes 5 to 10 pianos a month to the debris transfer site here. The company was founded in 1874 by the great-grandfather of the brothers Bryan and Charles T. O’Mara Jr.

Bryan O’Mara and an employee, James A. Fox, drove their truck into a hangarlike structure one day last week. Inside the truck were six uprights and four grands. Several came from the Philadelphia school system and one from a retirement home. “This was Mrs. Dombrowski’s from New Hope,” Mr. O’Mara said, patting the Knabe.

Mr. O’Mara and Mr. Fox pushed them off the back of the truck one by one. The top of an upright popped off when it landed. Mr. Fox tossed amputated piano legs and a pedal mechanism. Sprayers from above sent out a swirl of dust-settling mist, adding to the surreal atmosphere.

Mr. O’Mara had charged the former owners about $150 per piano. The trash site charged him $233.24 for dumping them all. A recycling company would pick up the debris and separate the wood from the metal.

Beethoven Pianos, a restorer, renter, mover and dealer in New York, has a 34,000-square-foot warehouse at the base of the Third Avenue Bridge in the Bronx, with scores of pianos awaiting disposal, said the owner, Carl Demler.

“In wintertime we burn them,” he said, pointing to a round metal stove. “This one has eaten many pianos.”

He watched as a worker, James Williams, dismantled a grand. “Ashes to ashes,” Mr. Demler said.

The junking of the modern descendant of the “gravicembalo col piano e forte,” the Italian precursor, can evoke strong reactions. A video posted on YouTube by one mover showing pianos being dumped drew violent remarks. Commenters said they felt sickened and called the scene barbaric, painful, outrageous, even criminal. “Stop the horror!” one wrote.

When the video was described to Madeleine Crouch, the administrator of the National Piano Manufacturers Association, she responded with a sharp intake of breath. “That makes me cry,” she said. “Pianos are lovable. You wouldn’t want your pet horse to be thrown out into the glue factory.”

Such reactions emphasize the abyss between the emotional value of used pianos and their worth in the marketplace.

“It is the most emotionally charged piece of furniture that there is,” said Martha Taylor, a rare restorer of uprights, whose Immortal Piano Company is based in Portland, Ore. “When I have to say: ‘You’ve buried your grandmother. You have to bury her piano,’ it’s a really hard thing.”

Many movers say they strive to find homes for abandoned pianos, making the rounds of nursing homes, schools and other institutions.

“You hate to see them go,” said Mr. O’Mara, whose company tries to give away discarded pianos. Any rescued piano, he noted, is also a potential future move for O’Mara Meehan. But there is just so much room in his warehouse for adoptees. He has to cull them like a herd. Churches and schools often do not have room or the means to maintain them.

Brian Goodwin, who owns Piano Movers of Nashua, N.H., and who had 30 pianos in his warehouse ready for the dump recently, said he created the Web site Piano Adoption partly as a clearing house to find homes for unwanted pianos. He posted the video of the dumped pianos that drew such shocked responses.

When owners ask where a cherished piano is going, he said, he tries to avoid the subject or tells them it will be put up for adoption.

“The last thing they want to hear is that it’s going to a landfill,” he said.

But piano movers can also take a clinical view of piano disposal, since they understand the economic realities. While noting that piano disposals can be painful, Mr. Goodwin said: “To be honest with you, the guys enjoy it. They try so hard all day not to scratch anything. And all of a sudden they get to throw it off the back of a truck.”