Media
For Liszt, Experimentation Was a Form of Greatness
January 6th, 2012
Tags: composers 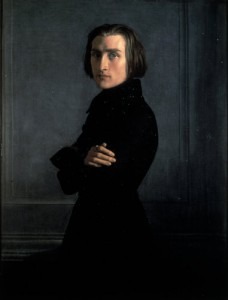 In January, during my Top 10 Composers project, a two-week series of deliberative articles, blog posts and videos to come up with a list of the greatest composers in history, Liszt was never really a contender. Among comments from readers, there were surprisingly few calls to include him in this select group.

But if this exercise, an intellectual game played seriously, had involved coming up with the Top 10 musicians in history — those creative artists whose overall contributions had enormous influence on the art form — Liszt would easily have made the list. In fact, Liszt, born 200 years ago this Oct. 22, might have been my choice for the top spot.

One person who would agree is the musicologist Alan Walker. In his monumental three-volume Liszt biography and in two supplemental books, Mr. Walker makes a case for Liszt, who died in 1886, as the towering musical figure of the 19th century. Last month, during the International Keyboard Institute and Festival at Mannes College the New School for Music, Mr. Walker gave a lecture, “Liszt at the Keyboard,” focusing on that master’s contributions to the piano. But he began by describing the stunning breadth of Liszt’s accomplishments, which unfolded, he said, “simultaneously in six directions.”

First and foremost, Liszt was a colossal pianist, the most awesome virtuoso of his era, who in his playing and his compositions for piano pushed the boundaries of technique, texture and sound. As a composer, beyond his works for piano, Liszt was the inventor of the orchestral tone poem and an inspired songwriter, and he produced a body of sublime sacred choral works. As a conductor, he introduced seminal scores, including Wagner’s “Lohengrin,” in Weimar.

Liszt was the most consequential piano teacher of his time. He taught some 400 students over 40 years, in line with his notion of “génie oblige,” the obligation of genius, and never accepted payment for the lessons, much to the chagrin of rival pedagogues. Liszt was also, Mr. Walker emphasized, a festival organizer and an important writer of essays, program notes and criticism.

In this bicentennial year there has been a bounty of Liszt recordings. Culling items from the Universal Classics catalog, Deutsche Grammophon released a limited-edition, 34-CD boxed set, “Liszt: The Collection,” a comprehensive offering of Liszt’s music, including organ pieces, songs and sacred vocal works. There have been Liszt solo piano recordings by Marc-André Hamelin, Nelson Freire, Garrick Ohlsson and others, with more to come.

In his lecture Mr. Walker emphasized two facets of Liszt the pianist that are more relevant than ever. Liszt was a champion of knotty works that mystified the public: not only music by contemporaries but also older scores, like the late Beethoven and Schubert piano sonatas. Take Beethoven’s “Hammerklavier” Sonata, a piece that during Liszt’s years as a touring virtuoso was widely considered an incoherent, unplayable creation of an old, deaf and eccentric composer. Liszt showed that here was an exhilarating Beethoven masterpiece.

After hearing Liszt perform the sonata in 1836, Berlioz wrote of Liszt’s impressive fidelity to the text in a review quoted in the first volume of Mr. Walker’s biography. If the “Hammerklavier” presented the “riddle of the Sphinx,” as Berlioz wrote, then Liszt had solved it, and “in such a way that had the composer himself returned from the grave, a paroxysm of joy and pride would have swept over him.” In making comprehensible a work not yet comprehended, Berlioz added, Liszt proved that “he is the pianist of the future.”

In addition, Mr. Walker said, Liszt essentially invented the idea of the piano recital, purposefully borrowing a literary term to indicate that a piano program should be not just a collection of interesting pieces but also a musical essay with a theme or narrative.

This is exactly what the brilliant pianist Pierre-Laurent Aimard accomplishes in his two-disc album “The Liszt Project,” which will be released by Deutsche Grammophon in September. Mr. Aimard brings his consummate skills and musical insights to performances of Liszt’s formidable Piano Sonata and lesser-known later works. These Liszt pieces are juxtaposed with works by Berg, Wagner, Scriabin, Bartok, Messiaen, Ravel and the Italian composer Marco Stroppa.

As a composer, Liszt was often an iconoclastic adventurer, especially in works with fluid, diaphanous textures and sounds that anticipated Impressionism. In many of his late pieces he explores radical chromatic harmony and dissonance, sometimes cutting loose almost completely from tonal moorings. In one telling sequence in “The Liszt Project,” Mr. Aimard segues from Liszt’s short, spare-textured experimental “Nuages Gris,” composed in 1881, to Berg’s early Piano Sonata (Op. 1), written some 27 years later, and it seems but a short leap from late Liszt to Berg’s intense, one-movement work, nominally in a minor key but sounding almost atonal. Mr. Aimard’s point in this album is not just to show Liszt anticipating 20th-century modernism but also to place him amid giants like Berg, Bartok and Messiaen.

But if Liszt never lacked champions among master pianists, why is he not considered as important as other Romantic composers, like Schumann and Chopin?

The problem may be that “greatness” thing, which was, admittedly, the nebulous criterion for my Top 10 Composers project. Liszt’s music can be audacious, visionary, mystical, thrilling. If it does not seem “great,” perhaps this is because he was not striving to compose masterpieces in the manner of a Beethoven. He was too concerned with the immediate and experimental.

Also, even Liszt lovers must admit that he wrote lots of shamelessly flashy piano pieces. It may not help his reputation as a master composer that Lang Lang has a new album on Sony Classical called “Liszt: My Piano Hero,” featuring a cover image of himself in a digitized, flame orange swirling cape. It looks like something out of “Priscilla Queen of the Desert.”

In discussing Liszt’s devotion to the piano, Mr. Walker quoted an open letter the 26-year-old Liszt had written to musicians who had criticized him in advance of a world tour, arguing that Liszt should instead devote himself to becoming a proper composer of symphonic works and more. In his letter, really a manifesto, Liszt placed the piano at the “top of the hierarchy of instruments.” The piano could evoke “the entire scope of the orchestra,” Liszt wrote, the “harmony of 100 players.”

This letter sheds light on Liszt’s passion for transcribing songs, symphonic music and excerpts from operas into all manner of piano fantasies and paraphrases. The best of these works are much more than virtuosic stunts. Liszt’s piano transcriptions of the nine Beethoven symphonies are works of genius. Vladimir Horowitz, in a 1988 interview, told me that he deeply regretted never having played Liszt’s arrangements of the Beethoven symphonies in public.

“These are the greatest works for the piano, tremendous works,” he said. “But they are ‘sound’ works,” by which he meant pieces that explore the piano’s coloristic possibilities. “For me,” Horowitz elaborated, “the piano is the orchestra. I don’t like the sound of the piano as a piano. I like to imitate the orchestra — the oboe, the clarinet, the violin and, of course, the singing voice. Every note of the symphonies is in the Liszt works.”

In this Liszt year we are still coming to terms with his achievement. Top 10 composer? Maybe not. But what a monumental musician! And what a character: a combination of showman and genius, superstar and, later in life, devout cleric. He covered all the bases.