Media
Flying with a cello is one traveler’s nightmare
March 15th, 2013
Tags: instruments 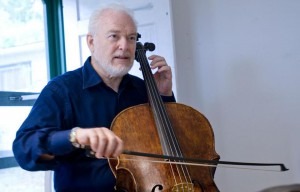 In a state of panic and fearing catastrophe, I am writing this midflight as I travel from Calgary, Alberta, to Los Angeles on American Airlines.

I thought I did everything right: bought two seats, a ticket for myself and one for my Andrea Guarneri cello made in 1669. I checked in, got two boarding passes, and went to the boarding gate without problem. It all went smoothly — the cello and I were even pre-boarded — one of the easier of the literally thousands of flights we have taken together. Until . . .

As the cabin begins to fill, the flight crew informs me that this is a “code-share” flight, and that although I have an AA ticket, the plane is operated by WestJet, and my cello is not allowed. (Cellists beware: WestJet not only code-shares with American, but with carriers including Korean Air, Delta Air Lines, and Japan Airlines.) Of course, I object, at first pleasantly, eventually vociferously — to no avail.

In desperation, I try the overhead luggage bin. The cello is too big. “What about the coat closet?” I ask.

“Sorry, sir. This aircraft has no closet.”

I get testy, and the captain appears. I suggest strapping the cello into the (assigned and paid-for) seat and letting him inspect it for safety. But I am asking the impossible: The cello is not allowed, he informs me.

Check the cello in baggage or get off the plane. That’s my choice.

“Please understand, sir, the cello will not be allowed on any other WestJet aircraft.”

“Will you put me on another airline?”

“That will be your own responsibility.”

My mind races: If   there is another carrier that flies its own planes to LA (and I know of no way to check), two one-way tickets bought at the gate would be más o menos [more or less] $2,000. And it’s late afternoon. Is there even another plane today?

So I do the unthinkable — hand my love of 45 years to a baggage handler, a nice guy who promises he will rope it down so it will not bounce, and it will be delivered to me by hand in Los Angeles.

The violent takeoff on a bumpy runway and ensuing turbulence — beverage service has just been discontinued — make me realize I have made one of the biggest mistakes of my life. I am near nervous breakdown; my imagination is out of control. I see my cello in pieces, fingerboard off, cracks in the back and — worst of all — the bridge pushed through the top.

Turbulence now seems to be over, but I cannot calm myself. The flight attendant is now becoming concerned for me; she gives me a free sandwich, but it’s one of the only times in my life I can’t eat. She sees that I’m writing. I think I’ll show her this.

I whisper its value — at first she has little reaction, but it now looks like she is going to talk to the captain!

Time has now passed. It’s been a three-hour flight. We are landing.

I am holding my breath.

We are at the gate. I don’t know what they discussed, but the captain has just left the cockpit to go below and personally bring me the cello!

Something is wrong. Five. Ten. Fifteen minutes have passed. The other passengers have disembarked and I am alone on the jetway. They must be afraid to show me.

Writing this all down while waiting gives me something to do — I am furious. I will sue. I will blast this story all over the Internet. I will . . .

Here comes the captain with Miss Cello. I open the case, pluck the strings (still in tune). No cracks, all is intact.

WestJet responds: Spokesman Robert Palmer forwarded to the Globe the following from the airline’s website:

“Musical instruments: Although seats may not be purchased for instruments, we will accept small instruments as part of the carry-on baggage allowance. Exceptions may be made for irregular-sized instruments. All instruments must be stowed in the overhead compartment, under the seat or in other approved locations. This is left to the discretion of the cabin crew and Customer Service Agent upon checking flight and baggage loads. Instruments may also be accepted in checked baggage when they are properly packed.”

Palmer added: “There is no rule banning cellos or any other specific musical instrument. However, they must be able to be stowed in the overhead bins. If they are too large or of an odd shape, they must go below the wing. You cannot buy a seat for a musical instrument because the seat and its restraint system are designed and rated for a person.”