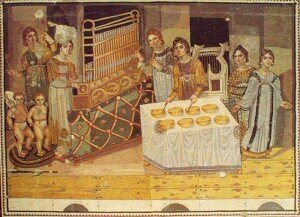 We are often immersed in what the ancient world looked like when we visit a museum or an archaeological site. However, the vibrant soundscapes heard at festivals, funerals, courtly feasts, theatrical performances, gladiatorial shows or just while shopping in the ancient world are important to reconstructing the past. A number of ancient historians are hard at work to bring the music of antiquity back to life for the enjoyment of the modern world. Here are just a few samples to listen to.

Ancient Greek Music: Historian of ancient music Armand D’Angour recently posted the first choral performance with an aulos (a Greek wind instrument akin to a flute) of scores originally written by two ancient authors. The first is a Delphic Paean by the ancient musician Athenaeus (127 BCE) and the second is composed by the playwright Euripides for the chorus in his tragedy Orestes (408 BCE). Each shows the import of music in rituals of Greek worship and within the context of theatrical performance. Full story.