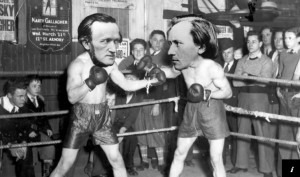 Brahms vs. Wagner was one of classical music’s bad blood rivalries.
Photo illustration by Mike Rinzel

Louis Armstrong and Dizzy Gillespie. Oasis and Blur. Biggie and 2Pac. Music rivalries have a long history and classical music has seen its share of bad blood. Even though the music makes you feel great, there were definitely some composers you wouldn’t want to cross. Here are five juicy chunks of musical beef that the classical world has cooked up over the years.

Mid-19th century Germany saw one of classical music’s most notable rifts: the War of the Romantics. Progressive composers favored program music that told some kind of story. Traditionalists believed that music shouldn’t have to be “about” anything. The stylistic differences are typified in the music of progressive Wagner and conservative Brahms. Their relationship started as an amiable one, but Wagner grew to dislike Brahms’s guts — going so far as to demand that Brahms return a gifted manuscript of Tannhauser. Full story.