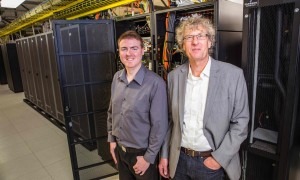 Researchers in New Zealand say they have restored the first recording of computer-generated music, created in 1951 on a gigantic contraption built by the British computer scientist Alan Turing.

The aural artefact, which paved the way for everything from synthesisers to modern electronica, opens with a staunchly conservative tune – the British national anthem. Full story.