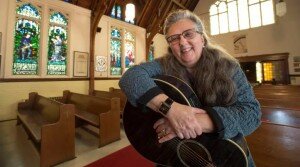 Musician Colleen Newell took part in the study examining how parts of the brain react when people with early-stage Alzheimer’s or mild cognitive impairment listen to music. (Frank Gunn/Canadian Press)

It’s long been known that Alzheimer’s patients often retain musical memories, even when recall of names, faces and places has been lost as the disease relentlessly destroys key areas of the brain.

Now Canadian researchers believe they know why, thanks to the power of MRI brain scanning.

Toronto scientists enrolled 20 people with early-stage Alzheimer’s or mild cognitive impairment in a study to discern what was occurring in their brains while they listened to familiar music and a composition they had never heard before while having MRI scans. Full story.