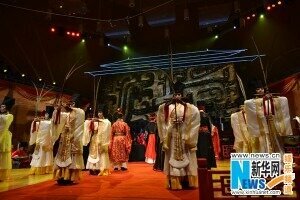 Scholars specializing in Chinese music traditions recently gathered in Beijing to discuss how the decline of classical music education, which also emphasizes ethical education, may cause many problems in contemporary Chinese society.

Listening to music is more important than singing in itself in terms of cultivating one’s aesthetic values. Researchers on music tradition in China have suggested that young people lend an ear to China’s traditional classical music so as to refine their minds and tastes.

However, De Yin, President of the Yunzhong Academy of Chinese Liberal Arts, thinks that finding traditional classical music may be a hard task for most since classical music education is no longer popular in China.

Yang Heping, director of the Music Research Center of Zhejiang Normal University, believes that the gradual disappearance of China’s traditional classical music from the public domain may have contributed to a general decline in moral standards, even corruption.

Chinese classical musical education has traditionally been conceived of in terms of ethical education, since it emphasizes cultivation of character in addition to the development of performance technique and musical knowledge.

Music was considered an indispensable part of general education in ancient China, being one of the six core subjects in the curriculum for youth education during the time of Confucius.

Yang believes that there should be a return to this tradition in China. He proposes a government legislation covering traditional classical culture studies in the classroom, which also includes Chinese music and calligraphy.

“The legislation is crucial for the recovery of traditional classical culture studies in the classroom. The Ministry of Education should require primary-school students to study folk songs, opera, and classics, including, a Chinese poem called the Thousand Character Classic; even Chinese calligraphy should be part of the curriculum.”

De Yin emphasizes that restoring Chinese music traditions is of the utmost importance and she offers concrete advice on revitalizing traditional Chinese classical music, through citing an example from the Yunzhong Academy of Chinese Liberal Arts, where she works.

“Our classes enable young people to gradually understand the important role of music in shaping people’s mindsets; we encourage them to replace the music saved on their mobile phones from songs that may heighten feelings of disappointment and lead to fickle behavior, to calming music that may help people achieve a peaceful mind as well and feel more inspired.”