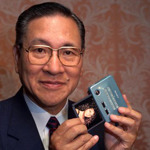 Former Sony president Norio Ohga, who helped transform the music industry with the development of the compact disc format, has died at the age of 81, the company said.


The music school graduate served as president from 1982 to 1995 and led the evolution of the electronics manufacturer into a global entertainment empire covering music, movies and computer games.

Ohga, whose talents were spotted when as a student he complained about the quality of a tape recorder made by Sony’s predecessor, died on Saturday from multiple organ failure.

“By redefining Sony as a company encompassing both hardware and software, Ohga-san succeeded where other Japanese companies failed,” current Sony chief executive and president Howard Stringer said in a statement after Ohga’s death on Saturday from multiple organ failure.

“It is no exaggeration to attribute Sony’s evolution beyond audio and video products into music, movies and game, and subsequent transformation into a global entertainment leader to Ohga-san’s foresight and vision.”

Along with development of the CD format, Ohga led Sony’s negotiations in 1968 with CBS Corp, which resulted in the creation of CBS/Sony Records, now Sony Music Entertainment.

His decision to purchase Columbia Pictures for $US3.4 billion in 1989 cemented Sony’s position as an entertainment conglomerate, despite initially facing criticism that the iconic Hollywood studio should not be sold to the Japanese firm.

In 1993, Ohga launched Sony Computer Entertainment Inc into a sector dominated by established players including Nintendo and Sega.

Despite scepticism even within Sony, the PlayStation console was launched in 1994 and later became a core part of the company’s business.

Ohga’s career began after the self-taught engineer approached Sony’s predecessor, Tokyo Telecommunications Engineering Corp, to point out the shortcomings of its tape recorder and suggested ways to improve it, according to the company’s corporate history.

Impressed with his insights, Sony co-founders Masaru Ibuka and Akio Morita made the aspiring baritone singer a consultant in 1953 while he was still studying at the Tokyo National University of Fine Arts and Music.

Under Ohga’s leadership, Sony revolutionised the music industry with the CD format in 1982, co-developed with Royal Philips Electronics.

Ohga pushed for the 12-centimetre format with 75 minutes of recording capacity to fit all of Beethoven’s Ninth Symphony without interruption.

While the CD took off, Ohga suffered a setback when Sony’s betamax video format lost a fierce battle to rival format VHS, which then became the global standard.

But he proved he had not lost his pioneering vision and promoted the video game business with the launch of the PlayStation console despite opposition within his firm.

Mindful of the importance of the brand image, he designed the Sony logo and always stressed that the “four letter word” was the company’s biggest asset.

It was Ohga who built upon the innovative engineering of the firm’s early days to define Sony’s emphasis on design and its brand image to build a global consumer base, the company said.

He was the “Embodiment of Sony spirit,” the Asahi Shimbun said in a headline while the Tokyo Shimbun said even from his early days he brought a sense of unity to product designs to enhance the brand image.

Japan recognised his achievements by presenting him with some of the nation’s top honours and France awarded him the Legion d’Honneur.

Sony said it would conduct a corporate memorial, after a private ceremony.