Media
Evoking the Past by Hearing Its Sounds
July 16th, 2010
Tags: instruments 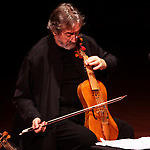 FOR Jordi Savall — early-music pioneer and master of the viola da gamba — music is always more than fleeting sounds. It enfolds histories. It reflects worlds. To draw a distinction between musicology and the sheer joy of performance is next to impossible.

“I combine both,” Mr. Savall, 68, said recently by Skype from his home in Bellaterra, Spain, outside Barcelona. “Reality is always somewhere between theory and practice. It’s difficult to know.”

Many specialties of his — songs of the troubadours, say — require as much intuition as scholarship. What exactly do the notes on parchment mean? How much is unwritten? How much room is there for personal flourishes?

The chronicle of Mr. Savall’s voyages of discovery is written in the discography of Alia Vox, a label founded in 1998 to produce and release his recordings and those of his circle of like-minded adventurers: his wife, the crystalline soprano Montserrat Figueras; their children, Arianna and Ferran Savall, instrumentalists and singers; the vocal consort La Capella Reial de Catalunya; and the period-instrument ensembles Hespèrion XXI and Le Concert des Nations.

The large catalog is as spiked with curiosities as a Renaissance prince’s cabinet of wonders. One album is dedicated to chants of the Sibyl, another to “Don Quixote.” “Lachrimae Caravaggio,” composed by Mr. Savall, evokes canvases of that revolutionary Italian painter. Other entries commemorate historic personalities like Charles V and Christopher Columbus. Travelogues in music capture impressions of the Silk Road, the Sephardic diaspora, Istanbul. Operatic rarities run from “Il Farnace,” by Vivaldi, to “Una Cosa Rara,” by Vicente Martín y Soler. A historic tribute to Ireland and Scotland (“The Celtic Viol”) jostles Arvo Pärt’s 21st-century prayer for peace “Da Pacem.”

It would be futile to seek some hidden figure in the carpet. “One aspect certainly is to recover music that has been unjustly forgotten,” Mr. Savall said. “But our recordings of Handel’s ‘Water Music’ and ‘Music for the Royal Fireworks’ have sold more iTunes downloads than any other. We have done Bach’s ‘Brandenburg’ Concertos, Haydn’s ‘Seven Last Words,’ the Mozart Requiem, Beethoven’s ‘Eroica.’ ”

For the thematic projects the CDs are often packaged in the covers of multilingual hardcover books of several hundred pages. Examples include the new “Forgotten Kingdom: The Albigensian Crusade,” recalling a half-century of savagery of Christian against Christian, and a forthcoming portrait (15 years in the making) of the carpetbagging dynasty of the Borgias, who just so happened to be great patrons of sublime musicians.

But the project that may illustrate Mr. Savall’s vision at its most majestic is “Jerusalem,” a homage, in the words of the liner notes, to “the city endlessly built and destroyed by man in his quest for the sacred and for spiritual power.”

According to a contested etymology, the name Jerusalem translates as “City of the Twofold Peace,” referring to peace on earth and in heaven. But through century after century of crusade and jihad, that peace has existed more as a wish than as a reality. In more than two and a half hours of music on two CDs the transcendental longings of Jew, Christian and Muslim are accorded equal dignity, with distinguished guests from Israel, Palestinan territories, Armenia, Greece, Iraq, Syria, Turkey, Morocco and Afghanistan enhancing the exotic palette. The printed material appears in eight languages, including Arabic, Hebrew and, as always, Mr. Savall’s native Catalan. The album forms the basis for a concert, “Jerusalem,” to be presented by Great Performers at Lincoln Center in the Rose Theater on Monday night. (This follows a more intimate evening, “Orient-Occident: A Dialogue of Cultures” on Sunday in the Allen Room.)

“For believers the earthly Jerusalem was always the mirror of the heavenly Jerusalem,” Mr. Savall said. “When the earthly city was destroyed, they thought the heavenly city still existed. At the beginning of the recording we represent the heavenly aspect of Jerusalem by three different prophecies of the Last Judgment, which all three religions predict will take place there. That’s why the cemetery space is so expensive.”

Characteristically, the elegiac, transparent tone of Mr. Savall’s performances evokes candlelight, contemplation, distant thunder. Here the program opens with the rumble of thunder up close, followed by the squall of a fanfare for shofars.

The zealotry, xenophobia and aggression that have scarred the history of Jerusalem never blaze forth from the fresco, but in a smothered way the evidence is there. Songs that fall gently on the ear advocate the slaughter of the depraved. As a matter of historic conscience, Mr. Savall also incorporates Pope Urban II’s call to arms of 1095, which set off the crusades. But the delivery of the text, in French, is bland, and the fire and brimstone will be lost on listeners who fail to read along.

Mr. Savall set out on a life in music as a boy soprano in the chorus of the Escola Pia in his native Igualada, in a remote corner of the province of Barcelona. When his voice broke, he took up the cello. He found his true medium in the viol, a Renaissance string instrument that has frets, like a guitar, but is played with a bow and held between the knees, like a cello. The viol is far from showy by nature, yet in the right hands it speaks with rare eloquence.

Mr. Savall stepped onto the early-music scene as a scholar and virtuoso four decades ago; his broader celebrity dates from 1992 and the release of Alain Corneau’s film “Tous les Matins du Monde.” It revolved around the French Baroque composer Marin Marais, whose austere meditations for viol are among the glories of a long-forgotten repertory. On screen Gérard Depardieu mimed the aged Marais at his instrument, but Mr. Savall’s hand drew the bow off camera. The soundtrack remains the No. 1 seller in the Alia Vox catalog, with 130,000 copies sold, a formidable figure in the niche within a niche of early music. Authenticity, in the sense of a materially accurate reconstruction of a past beyond recall, is seldom if ever Mr. Savall’s objective. “Music doesn’t have any lasting existence,” he said. “You can only play music of today.”

For the Jerusalem project he and his collaborators gathered musical impressions in the city’s synagogues and churches and in the Arab quarters. For “The Forgotten Kingdom” they traveled to Carcassonne and Montaillou in southern France, centers of the radically spiritual, ruthlessly suppressed Cathar faith.

“Real life plays as important a role in our work as what we discover in libraries,” Mr. Savall said. “Real places help us understand many things that are not written in books. The process of discovery takes a long time. With study you can get close to ancient times, to feel how people sang and improvised long ago. But when we put all that together with our musicality, our taste, our fantasy, what you hear is something contemporary, the same as when you see living actors in a scene from ‘Hamlet.’ ”

The Argentine-born composer Osvaldo Golijov — no antiquarian, a multiculturalist with a vengeance and an avid collector of Alia Vox recordings — takes Mr. Savall’s work in just this spirit.

“I’m honestly not so interested in historical truth,” Mr. Golijov said from Boston. “But I do believe in the kind of poetic truth Aristotle speaks about. As a student I lived in Jerusalem for three years, and my world changed completely. You hear music all the time. The call of a muezzin from a minaret. Beautiful orthodox chants. There are so many monks, Greeks, Armenians. And the Sephardic Jews. All the cultures coexist. Listening to Savall’s recordings is like that, full of connections and differences.”

On another front, Mr. Savall has lately turned his attention to the intricate musicological questions of Bach’s B minor Mass, which he will record next year. Should the choruses be sung by minimal forces, as some have argued? Or are larger numbers appropriate? The Mass was not performed complete in Bach’s lifetime, so we cannot fall back on his practice (which might in any case have been determined by financial constraints as much as by artistic preference). In performances in Spain, Mr. Savall took no either-or position but deployed forces according to the character of the movement.

“Five solo singers singing with wonderful diction can bring an incredible richness of detail and emotion to the lightly scored sections,” he said. “The more heavily scored sections call for the brilliant, powerful sound of a larger ensemble. In the opening and closing numbers the soloists and chorus are combined. The many textures make the music very rich, very beautiful and musically very logical.”

But the joys of the canonical masterpieces will never keep the explorer and time traveler in Mr. Savall grounded for long. “With the B minor Mass or the Monteverdi ‘Vespro Della Beata Vergine,’ everything is decided for you,” he said. “Everything is very concrete. All you can work with is the way you perform it. Making ‘Jerusalem’ or ‘The Forgotten Kingdom’ or ‘Don Quixote’ is more like making a movie or a theater piece or writing a novel.

“Have I told you my dream? To create, with Montserrat and our collaborators, a quarterly magazine on the arts, theater, movies, dance, everything, distributed around the world in 12 languages. Our books are a step towards that reality.”