Media
Everything to play for at the Tchaikovsky competition
December 21st, 2011
Tags: destinations, piano 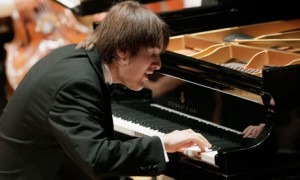 It’s the fiercest, sweatiest, most nerve-shredding competition in the classical world. Tom Service reports from Moscow

British pianist Peter Donohoe is used to being lionised in Moscow. In 1982, Donohoe won the highest prize awarded at the world’s most prestigious and controversial classical music talent-show, the Tchaikovsky Competition. Those two words instil sweaty-palmed nervousness and feverish excitement in any musician who’s ever competed in Russia, and in anyone who ever watched those grainy broadcasts of the finals that used to beam into our living rooms from the USSR every four years in the 1970s and 1980s. They were messages from another world, visions of an ethereal realm of the brightest and best pianists, violinists, cellists and singers. Donohoe remains a hero in Moscow, and his performances of Tchaikovsky’s First Piano Concerto and the “Rach 3”, Rachmaninov’s Third Piano Concerto, are still talked about with misty-eyed reverence in the corridors of the Great Hall of the Moscow Conservatory, home of the Tchaikovsky Competition since its first edition in 1958.

As a Tchaikovsky laureate, and a member of this year’s piano jury, Donohoe is less used to being verbally abused by the fervent Muscovite public. But that’s what happens to him on a sweltering June night after the penultimate round of this year’s competition. “Shame!” they shout as he leaves the stage door of the Conservatory, “it’s the wrong decision!” Donohoe talks to the crowd, but they’re having none of it. One of their favourites, 21-year-old Alexander Lubyantsev, has been voted out of the competition by Donohoe and the rest of the jury. Instead of making the final round and becoming one of the lucky five to play in the Great Hall, Lubyantsev has to pack his bags, his performance of Mozart’s concerto K467 deemed not good enough to make the cut. For his supporters, it’s an unthinkable outcome. Backstage, Lubyantsev is mobbed like a pop star by groups of photographers, journalists and teenage girls.

I’ve never seen anything like it. The early rounds of most classical music competitions in this country are the preserve of the anoraked and the obsessive, but in Moscow, the halls are packed for every session. Thousands of music-lovers follow the competition from beginning to end, making lists of their favourite young competitors, becoming partisan supporters of one pianist’s Beethoven, another’s Schubert, another’s Scriabin. It’s the most restless, fidgety, participative audience I’ve ever encountered. They feel every twist and turn of an interpretation, live the highs and lows of a pianist or a cellist’s performance, celebrate their victories in getting through to the next round, and lament with frustration when their favourite doesn’t make it. The piano finalists aren’t revealed until 11.30pm, after the final performance of the Mozart concerto round. Around 500 people wait about for an hour and a half after the concert, just to be there when the result is announced by the seven-man jury. It’s moving, extraordinary and just a little bit mad how much the competition matters to Moscow’s music-lovers.

Designed as a showcase for the quality of Soviet music education, the original 1958 competition became one of the most important moments in postwar geopolitics. Amazingly, the winner wasn’t a Russian, despite the Soviets’ best efforts, but a tall, gamine 23-year-old Texan called Van Cliburn. For an astonishing moment that year, Van Cliburn was the most famous man on the planet, his winning performance of the Tchaikovsky First Piano Concerto seen by millions, his face on every magazine and newsreel, a symbol of the potential for cultural communication across the nuclear divide. The Russian audiences fell in love with Van Cliburn. So, too, did that year’s judges. It was the only time the great Russian pianist Sviatoslav Richter was on the jury; he gave Van Cliburn 100/100 and the rest of the field zero.

In 2011, Van Cliburn is back, gilding the competition with his 76-year-old presence, his still immaculate coiffure and the occasional speech; everything, in fact, apart from his piano-playing. In the foyer of the Great Hall, I experience the Van Cliburn effect before I see the man himself: legions of mostly female fans of all ages – women just old enough to remember him at the first competition, students wanting to pay their respects and autograph-hunters eager for a whiff of stardom.

The history of the Tchaikovsky over the next few decades was almost as spectacular. British pianists have an astonishing record in the competition, with John Ogdon, John Lill, and Barry Douglas all winning the top prize in events from the 1960s to 1980s. The Tchaikovsky’s reputation was cemented by awards to pianists such as Mikhail Pletnev and Grigory Sokolov, violinist Viktoria Mullova, and dozens of others.

But British pianist Freddy Kempf’s story shows the darker side of the Tchaikovsky. In 1998, Kempf gave the outstanding performance of the final, offering Rachmaninov’s fiendish Variations on the Theme of Paganini. He was the clear favourite of the audience and the critics. Yet Kempf had to settle for third place, amid accusations that Russian jurors were favouring their pupils over international talent. There have been accusations ever since of favouritism, that juries have created a pro-Soviet cartel, and even reports of jurors being offered bribes to put a particular student through to the next round.

The Tchaikovsky’s reputation was in danger of becoming poisonous rather than prestigious. Cue Valery Gergiev. To save this year’s festival, and to restore the Tchaikovsky to its rightful place as the most effective arbiter of international classical music virtuosity, the Russian conductor – one of the best-connected musicians in the world – was drafted in to organise the juries. He managed to convene an all-star lineup for each of the panels, including violinists Maxim Vengerov and Anne-Sophie Mutter, singers Renata Scotto and Ileana Cotrubas, and pianists Barry Douglas and Dmitri Alexeev. Controversially, he moved the violin and singing competitions from Moscow to St Petersburg, and most importantly of all, he enlisted Richard Rodzinski, formerly of the Van Cliburn competition in Texas, as general manager. Rodzinski set up a new voting system to ensure fairness and transparency. You can read the rules online; if you understand them and you’re not a mathematician, you’re doing better than me. But the message was clear: this time, the Tchaikovsky would be above reproach.

So did it work? However transparent the voting, the Tchaikovsky wouldn’t be the Tchaikovsky without some controversy. And so it proved: in his office in St Petersburg, a neo-baroque symphony of leather and sumptuous ornaments, Gergiev told me that he was under pressure to intervene in the piano competition, to reinstate some of the Russian competitors the jury had kicked out. He said that if there were more Russian pianists on the jury, if Denis Matsuev and Vladimir Ashkenazy had been able to attend from the start, the result might have been different. But he did not interfere, allowing the results to stand.

The finals were impressive. The array of youthful talent on display in the violin competition was jaw-dropping. In the marble and red-velvet cocoon of the Philharmonia concert hall in St Petersburg Itamar Zorman’s performance of the Berg Concerto was astonishingly intimate and intense, while Sergey Dogadin played Shostakovich’s First Violin Concerto with breathtaking security and poetry.

There was a lot at stake in these performances. This year, the prizes the musicians were competing for amounted to more than a gong and some cash. All the winners are guaranteed an international tour with Gergiev, and his concert with the London Symphony Orchestra in London this week gives audiences the chance to assess the best of the piano, cello and vocal competitions. (Alas, no gold medal was given to the violinists, none of them being deemed sufficiently exceptional: Zorman and Dogadin shared two silver medals. They have high standards, Mutter, Vengerov et al.) For me, the quality was highest of all in the cello competition, but you don’t have to take my word for it: the entire competition, every single note played in Moscow and St Petersburg, is available to watch for free online.

In the footsteps of the greats

The winner of the piano competition was Daniil Trifonov, a Russian. Whether his Tchaikovsky First Piano Concerto is worthy to stand next to Van Cliburn’s or Pletnev’s, I’m not sure, but going on tour with Gergiev is the best place for him to find out whether he has got what it takes to walk in their footsteps. Only time will tell if the Tchaikovsky really was saved in 2011, if the juries really did pick the right winners, in the careers the musicians succeed – or fail – to have.

And the people’s favourite, Alexander Lubyantsev? For my money, Donohoe and the jury were right. He deserved to lose out for one of the most ham-fisted performances of a Mozart piano concerto I’ve ever heard. Not that I told his supporters that outside the Moscow Conservatory …