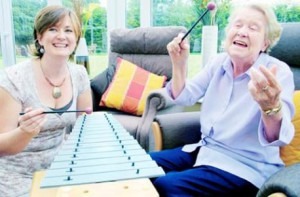 Music has charms to soothe even those suffering from severe Alzheimer’s disease. That’s the key finding of encouraging new research from France, which found music therapy enhanced the moods of patients as much as four weeks after the conclusion of a four-week-long program.

It’s the latest in a series of studies that point to music therapy as an effective tool in dealing with dementia. The Italian Psychogeriatric Association just reviewed 32 papers published over the past decade, and found a pattern of significant reductions in such symptoms as depression, delusions, and hallucinations.

The new French study, published in the journal Music Perception, is—like most studies of people suffering from dementia—based on a very small sample: 11 people. But it was structured to provide a direct comparison between music therapy and an alternative treatment approach: specifically, eating and cooking.

The patients, members of a French residential home for the elderly who had been diagnosed with severe Alzheimer’s disease, took part in eight sessions (each lasting two hours) over four weeks. By design, each of the sessions alternated between passive and active activities.
The five members of the music group “were seated in a circle around a table on which various musical instruments (mainly percussion) were placed,” writes a research team led by Sylvain Clement of the Universite de Lille – Nord de France. A selection of songs proposed by the patients themselves were played from a CD, and the patients were encouraged to accompany the music “by tapping, rubbing or shaking” the percussion instruments.

“Between the songs, patients were encouraged to express their feelings about the musical listening and to try to verbalize memories evoked by the music,” the researchers write.

The six members of the cooking group “were seated around a table on which utensils and ingredients needed to prepare a dessert were placed.” During each session, they together created a simple dessert such as an apple pie or fruit salad, “cutting, peeling, measuring quantities and mixing the ingredients” and tasting them as they went along.

Echoing the music sessions, “participants were encouraged to express their feelings about food and to try to verbalize memories evoked by food,” the researchers write.
The participants’ state of mind was evaluated at the beginning, midpoint and end of the four-week program, and again two weeks and four weeks later. The researchers used three separate measurements of the patients’ emotional health: their facial expressions, vocabulary, and overall mood. “The main results were that music was more effective than cooking in improving the emotional state of patients with Alzheimer’s disease,” the researchers write.

Specifically, the music therapy increased scores on all three measures at both the midpoint and end of the four-week program. Moreover, the patients’ moods remained significantly elevated four weeks after its conclusion.

“In contrast with the music intervention, the cooking sessions had almost no positive effect on the emotional state of the Alzheimer’s disease patients,” the researchers write.

The difference is striking, since the two sets of activities were similar in many ways: both elicited strong, pleasurable sensations (hearing music and tasting sweets), and both involved pleasurable interaction.

Clement and his colleagues aren’t sure why the music therapy was so much more effective. But they note that in a 2009 study (published in French), they found music therapy improved the mood of Alzheimer’s disease patients far more than participation in a painting workshop (although visual arts have their partisans, too).

“It appears that music interventions may have a specific beneficial effect on the emotional state of patients with Alzheimer’s disease,” the researchers conclude. While more and larger studies are needed, it seems a particularly effective way “to produce long-lasting effects on patients’ emotional well-being” involves beating time to favorite tunes.