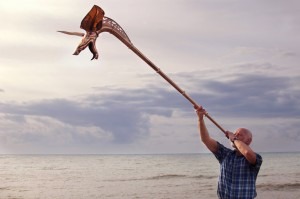 John Kenny, a trombonist from Britain, blasting a carnyx on a beach in Tarquinia, Italy. Credit Francesco Marano

Peter Holmes, a 76-year-old former aircraft engineer, was standing in his tidy living room in North London recently holding a Scandinavian war horn more than four feet long. When asked how the instrument, known as a lur, is played, he said: “I’ve no idea. No one’s played it for 3,000 years.”

With that, Mr. Holmes put the lur to his lips and blew. Rather than an angry bellow that might transport a listener to a lonely fjord among Viking warriors, it sounded more like a bugle played by someone with a lisp. Full story.