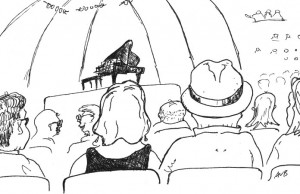 At Austin’s Central Presbyterian Church for a recital by world-renowned violinist and teacher Miriam Fried, I was immediately struck by a note in the program booklet. On one page of the sparsely written brochure, there was a short list of two pieces to be performed and the name of the artist. On the other page, a box highlighted a list of concert rules — rules that ran much longer the list of music. The rules section was titled “Concert Etiquette in a Box.”

The box listed the familiar procedures that everyone who has ever been to a classical concert is aware of on some level. Be quiet. Clap at this point in the music. Don’t clap at that point. Most presenters are a bit more understated in their presentation and don’t necessarily set off a rulebook in boldface type inside of an actual box.

But don’t dare think outside of that box. Full story.