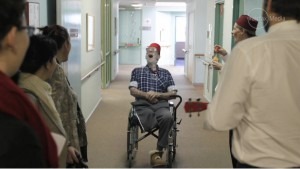 THE SMILE PROJECT
Bringing joy to the lives of elderly people
in nursing homes.

VOICES are singing and chattering, whistles blowing and instruments sounding as a host of entertainers ready their acts and prepare to meet their audience.

This bustling ”green room” is not at a theatre or festival, however. It is in an aged-care facility in south-west Sydney. Auditions are being held for jobs entertaining the residents – a fast-growing area of work for performers.

About 25 of them – armed with everything from puppets, ukeleles and bags of tricks to miniature witches’ hats – have soon fanned out in small groups across the sprawling Whiddon Group Easton Park facility in Glenfield to demonstrate they are cut out for the task and can brighten the residents’ day.

If successful, they will be signed up for a program that is sending performers into about 45 aged-care facilities and counting in Sydney, Melbourne, Brisbane and beyond.

”This is the last vaudeville circuit,” said Jean-Paul Bell, the veteran performer overseeing the Play Up Performer program. ”It’s reigniting the imaginations of people in their 90s. It’s very good for, say, young actors to do because you’re meeting the characters you may be playing later in your career.

”For both performers and residents, it’s a mutual exchange of fun and laughter.”

The entertainers, with backgrounds crossing from music and cabaret to acting and clowning, have come from around Australia to audition and train for its year-old program, run by the charitable Arts Health Institute. It continues work started under the nationally funded SMILE study, which found using ”humour therapy” on people with dementia reduced agitation and lifted quality of life.

Play Up was creating work for performers ”at a rate of knots”, said the institute’s chief executive, Maggie Haertsch, who called it professional performing’s fastest growth area. About 100 entertainers had been put on its list for work from half a day to three days weekly, providing $250 to $1800 earnings.

”I feel it’s a measure of our humanity how we care for those people in their end stages of life,” Dr Haertsch said.
At Easton Park, which includes high to low and dementia care, connecting meaningfully with residents can be a tough job. But the performers frequently draw smiles, laughter and engagement.

”Lovely!” declared Norma Finnerty, 83, after being regaled with puppetry and song. The fun broke the monotony.
Soon after, musician Tim Hall sings and then whips out a phone for Bernie Denny, an amputee in his 80s. It’s Jackie Onassis on the line, Hall says. Despite difficulty talking after a stroke, Denny plays right along, becoming animated as he nods with enthusiastic ”ohhhhs” and ”yeahhhs”.

Hall, once of the band the Whitlams, said performing in the home was a new, enriching and intense experience. ”It’s been very confronting, because a lot of the things you rely on as a performer is broken down here.”

Play Up mentor and assessor Lauri Kilfoyle, formerly of Legs On the Wall theatre company, said the performers most need improvisation skills and a comic element. ”I love watching the residents’ eyes light up.”