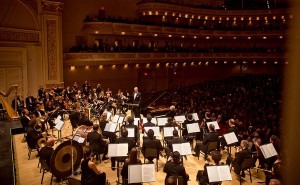 RECENTLY Bartok trounced Schubert in an impromptu audience poll at Carnegie Hall. I was surprised and delighted. It seemed an indicator, albeit fanciful, that the battle for contemporary music had been won.

The event was the first concert of the pianist Andras Schiff’s Perspectives series. The Budapest Festival Orchestra, conducted by Ivan Fischer, had just played a Schubert overture, Bartok’s First and Third Piano Concertos (with Mr. Schiff as soloist) and Schubert’s Fifth Symphony. Mr. Fischer charmingly offered the audience a choice of encores: Schubert or Bartok.

Shouts rang out for Bartok, with only scattered calls for Schubert. Mr. Fischer asked for a show of hands. An overwhelming victory for Bartok. “Well,” Mr. Fischer said, “how about something short by each?” So he conducted a lilting German dance by Schubert, then a zesty Romanian folk dance by Bartok.

I know, I know. The choice was between Schubert and Bartok, not Schubert and Gyorgy Kurtag. Yet my hunch is that the audience also would have gone for Mr. Kurtag, or even a new piece by a young composer from Budapest, had Mr. Fischer announced the work as something special.

Classical music audiences seem more curious than ever, and performers have been emboldened over the past decade or so to take more chances. Composers from the early and mid-20th century have been brought pretty well into the repertory. These days orchestras and ensembles trumpet their premieres. So should those who have campaigned for contemporary music declare victory?

Yes and no. Here is my field report from the battle front.

The New York scene has been rejuvenated of late by the emergence of clubs and alternative concert spaces where contemporary music of all kinds is presented to youngish audiences eager to check things out. Are these experiences prodding young listeners to give the established classical scene a try? It seems an open question.

But what about the more established institutions? Recent years have been tough economically for orchestras, ensembles and opera companies. It would be easy for the major institutions to look at the hotbed of activity in the smaller halls and alternative spaces and conclude that contemporary music is being attended to quite well. By this point in its history classical music has centuries’ worth of repertory, and our major orchestras and arts centers face the challenge of keeping that repertory fresh. The inclusion of new music has always been important, not just for its own sake — that is, for the future of the art form — but as a way to keep older works vibrant by juxtaposing them with the new.

Not that long ago the doomsayers were predicting the death of classical music. Yet during the 1990s the most innovative orchestras hired dynamic conductors with palpable enthusiasm for new music who had the capacity to excite their communities with fresh artistic vision, notably Esa-Pekka Salonen at the Los Angeles Philharmonic and Michael Tilson Thomas, still on the job at the San Francisco Symphony. More recently conductors like David Robertson at the St. Louis Symphony, Marin Alsop at the Baltimore Symphony and Gustavo Dudamel, Mr. Salonen’s successor in Los Angeles, won their appointments to a considerable degree because of their abilities to entice new audiences by embracing new music, living composers and experimental programming.

So how is the New York Philharmonic doing? The conductor Alan Gilbert arrived in 2009 full of promise and potential. His televised inaugural concert as music director was an inspiring statement of purpose and a welcome departure from the mostly musty tenures of Kurt Masur and Lorin Maazel. The program opened with the premiere of an urgent work by Magnus Lindberg. Then Renée Fleming sang a plush, haunting account of a 30-minute song cycle by Messiaen. After intermission Mr. Gilbert conducted a rhapsodic performance of Berlioz’s “Symphonie Fantastique.”

He has given audiences many such evenings since. An early milestone in his tenure came in the spring of 2010, when Mr. Gilbert conducted the New York premiere of Gyorgy Ligeti’s audacious 1978 opera “La Grand Macabre,” in an inventive production by Doug Fitch. To see not just the new-music crowd but also older Philharmonic subscribers laughing at this bleakly satirical, complex modern opera was, well, something I thought I would never see. In June the Philharmonic followed up with another exhilarating staged opera, Janacek’s “Cunning Little Vixen,” again directed by Mr. Fitch.

This season Mr. Gilbert has seemed less fired up and his programs have not been as visionary. But in June he will end the season boldly, when the Philharmonic appears at the Park Avenue Armory to play Stockhausen’s ambitious, seldom-heard “Gruppen,” which calls for ensembles of instruments to be placed throughout a large space, as well as works by Boulez, Mozart (the Act I finale of “Don Giovanni”) and Ives that do the same. The inclusion of the Mozart is a terrific idea. At his best Mr. Gilbert has a knack for mixing old and new works in ways that tease out resonances among them.

Compare-and-contrast programs have become commonplace. But it is easy for such ideas to become gimmicky. The pianist Pierre-Laurent Aimard is an ingenious practitioner of that approach: his 2006 recital at Zankel Hall, “A Study of a Study,” is just one example. Here was a fascinating program of 24 diverse études, not just by the obvious choices, Chopin and Liszt, but by Debussy, Rachmaninoff, Scriabin, Bartok, Messiaen and Ligeti. In this heady context Chopin seemed to anticipate Impressionism, and Rachmaninoff joined the ranks of the modernists.

But pairing Beethoven symphonies with contemporary works is no longer novel. So the conductor David Zinman’s series with the New York Philharmonic in March, The Modern Beethoven, in which concertos by Stravinsky, Barber and Hartmann will come between performances of Beethoven symphonies, six in all, will not seem particularly adventurous, even though Mr. Zinman was a pioneer in grouping Beethoven with 20th-century fare at the Baltimore Symphony in the late 1980s and ’90s.

Now that established institutions are doing better at embracing new music, ventures that once seemed suspect come across differently. One way conservative ensembles gave token attention to contemporary music was to present it in a subseries of concerts. In the 1990s, for example, the Chamber Music Society of Lincoln Center experimented with Music of Our Time programs, presented not at the society’s Alice Tully Hall home but at Merkin Concert Hall. The concerts were usually excellent, full of bracing modern scores and premieres. But the concept backfired. Living composers were forced into a contemporary-music ghetto.

That was then. Even before the cellist David Finckel and the pianist Wu Han were appointed as co-artistic directors in 2004, the society started winning over audiences with more adventurous fare. In a recent program works by Mendelssohn and Bruch were smartly chosen to set up the premiere of an elegant trio by Pierre Jalbert. With contemporary music now prominent in the society’s Alice Tully Hall programs, its informal contemporary-music concerts at the Rose Studio seem a fresh addition to its offerings, not some side operation for the new-music set.

The same is true for Contact!, the New York Philharmonic’s series of contemporary-music concerts, inaugurated by Mr. Gilbert. During the Masur and Maazel years, when the Philharmonic stuck out for its timidity, something like Contact! would have seemed just more marginalization.

Mr. Gilbert has commissioned works from emerging composers. Contact! programs, held at Symphony Space and the Metropolitan Museum, draw curious audiences and generate buzz. (Mr. Gilbert conducts the season’s first pair of concerts on Friday and Saturday.) Still, there are only two programs, each played twice a season. Unless the series expands, it will inevitably seem an offshoot.

Carnegie Hall got things right when it opened Zankel Hall in 2003. This sleekly modern subbasement space was conceived as a hip alternative to the storied Stern Auditorium upstairs. Zankel has been an ideal showcase for contemporary music and experimental programs. In October at Zankel the American Composers Orchestra opened an ambitious citywide festival, SONiC: Sounds of a New Century. This exciting event seemed every bit as essential as, say, the Tchaikovsky concerts the Mariinsky Orchestra had presented upstairs earlier in the month.

What about opera? Not that long ago some companies had to be almost guilt-tripped into commissioning new pieces. In 2010 Speight Jenkins, the dedicated general director of the Seattle Opera, finally presented his first company premiere, Daron Aric Hagen’s “Amelia.” Even with mixed reviews over all, the event generated citywide enthusiasm and drew international attention.

Yet in comparison with dance and theater, opera remains overwhelmingly involved with standard repertory. If plans hold, in the 2013-14 season the Metropolitan Opera will finally present the first premiere of a work commissioned by its general manager, Peter Gelb: Nico Muhly’s “Two Boys.” But give Mr. Gelb credit for bringing audiences seminal works from the 20th century, like Shostakovich’s black comedy “The Nose,” Janacek’s “From the House of the Dead” and Philip Glass’s “Satyagraha.”

So over all the forces for new music are advancing, but the campaign continues. It was gratifying to hear the superb organist Jon Gillock play Messiaen’s “Méditations sur la Mystère de la Sainte Trinité,” an uncompromising, wondrously mystical 90-minute work, recently before a riveted audience at the Church of the Ascension in Greenwich Village.

Outside the Juilliard building a contingent of Occupy Wall Street protesters, who found solidarity with the themes of the opera, lined up on the sidewalk and chanted for the Juilliard students to get “off the stage and into the streets.” Whatever your take on the political issues at stake, it was exhilarating to see a new opera catching the attention of young activists.