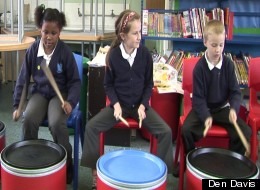 Children at Ride Hill Primary
in a Drumskool workshop

Teachers have hailed a drum school a “resounding success” after reducing crime in some areas by nearly a third.

Drumskool, which teaches “street drumming” to schoolchildren in Manchester has not only reduced petty crime in local areas but has also helped forged ties within the community.

According to PCSO for the Stalybridge area Gary Etchells, since the children have been occupied by the music lessons, local crime on the Ridge Hill Estate has decreased by 30%.

“It’s also great fun so the local kids look forward to participating which is half the battle,” he added.

The lessons are now being taught as part of the national curriculum in Tameside schools. The initiative originally hails from the US and was introduced there to combat gang culture. Street Drumming was introduced in New York during the 1960s and worked by giving gang members structured learning and took them off the streets.

Now, having been introduced in the UK, teachers are singing the programme’s praises.

Deborah Mason, headteacher at Ridge Hill Primary, Tameside, said the music lessons has had “many positive benefits” for the school and pupils.

“It’s fun, therapeutic, inspires through participation and it contributes to the national curriculum,” she said. “Above all, it engages young people regardless of musical or physical ability and helps to build a strong team spirit around the school”.

Drumskool, a music services company based in Ashton-Under-Lyne, Manchester, has been working in the Manchester community for the past eight years and recently developed a programme with a special needs college.

But it is only since June 2011 the charity made the scheme available to mainstream schools. The initiative now reaches more than 5,000 students aged between five and 19 years of age.

Schools from within the participating areas are encouraged to visit other institutions to show off their drumming skills which, according to Longdendale councillor Sean Parker-Perry, is having an added positive effect.

“Music is a great way to help kids to interact and Street Drumming is really helping to build bridges in the community,” he said. “Drumming groups are meeting other kids with different backgrounds from different schools.

“This broadens their whole social outreach, develops important skills and is already changing lives in the local area.”

The children are taught outside school hours by trained tutors, many of whom are young local musicians. Students are trained to drum to set rhythms, set patterns and set instructions to enable them to play together in unison.

“I love it! It’s the best lesson and i look forward to it all week.”

Drumskool, which is, supported by Impact England charity are already expanding into another 50 local schools and the organisers hope to establish the service nationwide later this year.