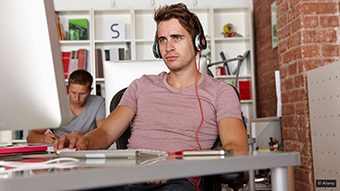 The debate over whether we should be allowed to rock out at our desks has been raging for decades. Now science is providing some answers – and they’re not what you think.

The weapon was initiated at precisely 10:30 in the morning.

It was 23 June 1940 and World War Two was in full swing. The Germans had already invaded vast swathes of continental Europe; in the preceding weeks, 10,000 British troops had been captured in Normandy.

Now the BBC had been asked to get involved. Their powerful intervention was completely invisible, yet capable of infiltrating the minds of thousands of people all at once, all over the country. Over the next few years, it arguably helped to win the war.

This was the “Music While You Work” programme – a brainchild of the UK government, which thought that broadcasting live, upbeat music in factories twice a day might help to step up the pace of work and get the military the munitions they so badly needed. Full story.