Media
The Doctor Is In (Your Pocket): How Apps Are Harnessing Music’s Healing Powers
June 9th, 2017
Tags: society 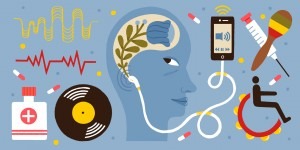 A new crop of startups are combining science and sound to help people to self-medicate with music on an unprecedented scale.

Before it happened, it seemed like just another day. As usual, Sean headed to the gym. Partway through his workout, though, the 22-year-old came up from a squat and felt what he thought was a burst of water in his head. As blood began seeping into his brain, Sean wobbled over to the bench and struggled to keep himself upright. He was rushed into emergency surgery and spent 36 hours lying in a coma before waking up to discover that, following his stroke, he couldn’t move the left side of his body. Full story.