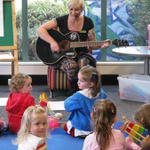 How do you get a group of 4-year-olds to cooperate? New research suggests the answer may be as simple as a singing lesson.


Singing together appears to inspire spontaneous cooperative and helpful behavior among 4-year-olds. That’s the conclusion of new research that provides support for an intriguing theory regarding the evolutionary origins of music.

Psychologists Sebastian Kirschner and Michael Tomasello of the Max Planck Institute for Evolutionary Anthropology in Leipzig gathered 96 4-year-olds from 16 German day care centers. The youngsters, from a variety of socioeconomic backgrounds, were broken up into pairs. They then took part in a 20-minute experiment that felt to them like playtime.

Kirschner introduced each pair of kids to a set of nine toy frogs, which could either be used as a simple toy or a musical instrument (by scraping its ridged back with a stick). The youngsters were told the frogs were asleep and needed to be woken up, either by a morning song or exercise.

Half of the young participants (24 seats of youngsters) sang an easy-to-learn song as they walked around the frogs’ “pond” (an oval blanket), synchronizing their steps to the pulse of the music. The other half walked or crawled around the pretend pond without musical accompaniment, having their frogs periodically jump in a nonsynchronized pattern.

Afterward, the children were presented with tubes filled with marbles. “The tube of one child was prepared so that the bottom fell out at the moment both children lifted the tubes,” the researchers write. “All six marbles spilled out onto the floor.” The researchers observed whether the other child helped his partner pick up the rapidly scattering spheres.

The children then played a game in which a task could be accomplished either individually (by walking back and forth from one end of an apparatus to another) or through cooperative action. The researchers observed whether they proceeded separately or coordinated their activities.

Writing in the journal Evolution and Human Behavior, Kirschner and Tomasello report that playing music as a group influenced behavior in both of the subsequent scenarios. Children who had sung and marched together were more likely to help one another pick up marbles. They were also more likely to choose the cooperative solution to the task.

Girls were more helpful and more likely to be cooperative than boys, whether they were in the singing group or not. But like the boys, their level of cooperation and helpfulness increased if they had participated in the music-making.

The researchers conclude that engaging in the “shared goal of vocalizing and moving together in time” strengthened the children’s “sense of acting together as a unit.” Their results support the hypothesis that music — at least in part — evolved as a way of fostering group cohesion, by “generating an intuitive feeling of community and bonding among the performers.”

Researchers from Singapore, who worked with college students as opposed to preschoolers, recently reached a similar conclusion.

“It is unlikely that children at the age of 4 made any rational choice like ‘because we just played music together, I will help you now.’ More likely, the children in our study made an intuitive decision to help the other child because they felt immediate empathetic concern with the peer’s misfortune the moment they saw the accident happening and felt committed to give support somehow,” Kirschner and Tomasello write.

“Understanding music as a collectively intended activity – with specially designed features that satisfy this human desire to share emotions, experiences and activities with others – might explain why the children in our study felt a stronger commitment after joint music-making, and so spontaneously helped or cooperated with one another.”

Kirschner cautions that the origins of music are most likely multiple and complex. He acknowledges it may also have developed as a means of sexual display or attraction, or of mother-infant bonding (think of lullabys).

But if the concept of music as a force for group solidarity seems distant in this era of earbuds and iPods, remember that it still used as a bonding tool “at many public occasions, such as sporting events, worship and weddings,” as Kirschner and Tomasello write. Not to mention military parades and funeral processions.

Their study not only provides some useful tips for preschool instructors; it also gives some strong clues regarding the role music has played in human history. Harmonizing, it seems, tends to breed harmony.