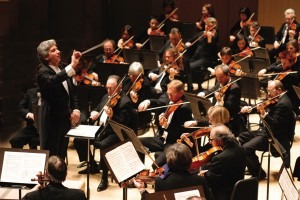 The 2010-11 season has been a tough one for classical music across the continent. In most cities, a sticking of heads in the sand in regard to how technology has changed our relationship with live performance and an insistence that the music itself was enough to fill the hall has left orchestral music standing in the corner wondering why people aren’t noticing how awesome it is anymore.

Add in shifting cultural priorities, major hits to endowments, bitter labor disputes and poor management, and many orchestras are naturally feeling more and more anxious about their future.

As dismal as the outlook may seem, some orchestras are doing it right. The Toronto Symphony Orchestra faced near bankruptcy in 1995 and 2001, a major labor dispute in 1999, half-full halls, crippling debt, and a CEO and conductor who jumped ship, yet it has come out the other side in great shape. This month, the orchestra reported that 35% of its audience is younger than 35 years old.

In 2001 the choice was make massive changes or fold. Choosing the former, and, frankly, with nothing left to lose, the TSO actively reached out to new audiences by fitting programming into their schedule instead of demanding the reverse. A new after-work concert series catered to commuters and a shorter Saturday night series was followed each time by a party in the lobby where musicians and the audience could mingle, drink and listen to local bands. The TSO’s biggest success, however, has been the “tsoundcheck” program (the “t” is silent), which offers $14 tickets to those from 18 to 35.

Offering cheap tickets to students is nothing new, but extending the privilege to young professionals and designing social events with them in mind is, even nine years later, still not the norm. Last year, 23,000 tickets were sold through tsoundcheck — four times more than the first year the program was offered.

The musicians have noticed.

“There’s been a complete shift in the nine years I’ve been playing with the symphony”, said horn player Gabriel Radford. “For us on stage, that has a tremendous impact. Things seem to come alive. At the end of a show, when you’ve put in all that work, it’s great.”

How has the TSO managed it? The secret seems to be that from the beginning the tsoundcheck program has been fully integrated into the organization rather than just a pet project. The administrators, marketers, musicians and music director Peter Oundjian, himself a risky pick when he was appointed in 2003, all work toward make coming to the symphony as easy and enjoyable as possible. Tsoundcheckers are treated the same as full-price subscribers, meaning they aren’t relegated to the nosebleeds or restricted to buying tickets hours before the concert.

As a result of their hard work, going to the symphony has become a normal thing to do for under 35s in Toronto, and has even become a popular date-night activity. Trina Senechal Klinck, 32, began attending the TSO when she started dating her husband, Ben, in 2006.

“It’s the same prices as the movies and it’s more of an outing and it’s cultural. I’m always up for trying new things and the symphony offers things that are compelling to go to — you don’t feel like it’s from the bottom of the barrel. We’ve introduced a lot of our friends to [the TSO].”

At the moment, the Los Angeles Philharmonic doesn’t have a dedicated young professional program but it does market its Friday Casual Concerts (which also offers a shorter, intermissionless program with a chance to meet the musicians after) and chamber music series to that age group. In 2010-11, the average orchestral patron age at Disney Hall was 64, with 11% of tickets going to people 35 and younger. The average age of a TSO patron is 49. The Chicago Symphony, which also has an average patron age of 49, recently reported that people 35 and younger bought 19% of its tickets last season.

When TSO Chief Executive Andrew Shaw was asked recently by the Toronto Star what he thought orchestra concerts would look like in five year’s time, he replied, “More social engagement, shorter programs and more emphasis on challenging and big works that take our intellectual and emotional capacities to a new level.”

More emphasis on intellectually and emotionally challenging works? Doesn’t the younger set want laser light shows and film scores? As it turns out, they don’t.

“If you listen to current bands like Radiohead, Fleet Foxes and Joanna Newsom,” said longtime tsoundchecker Dustin Cohen, 26, “you will see that … young people today continue to crave big-picture themes like love, loss, death and revolution. There’s a unique quality to live classical music. When I’m in the concert hall, watching the orchestra, I’m thinking: ‘I’m going to download this second movement when I get home!’”