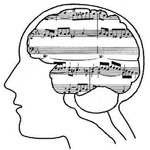 “It occurred to me by intuition, and music was the driving force behind that intuition,” said Albert Einstein, who did badly in school until his parents bought him a violin that he played to help him decipher various equations. Einstein believed that music was a key factor in helping him become a genius. Music can not only influence emotions and behavior, but it also can stimulate the memory.


Researchers throughout the world have conducted various studies to prove that music can improve childhood development and stimulate memory while studying. An experiment in Los Angeles revealed that after schoolchildren received keyboard lessons their spatial-temporal reasoning test skills increased by as much as 34 percent.

In experiments conducted in the 1950s and 1960s, Bulgarian psychologist Dr. George Lozanov found that incorporating classical music from the baroque period that uses a 60 beat per minute interval helped students learn new languages. His method helped students retain vocabulary information for half of a school year in just one day; students could learn foreign languages in less than a month at an 85 percent to 100 percent rate of efficiency. Students who took part in this study were able to recall information almost perfectly after four years without having to review what they had previously learned.

Named after a 1993 experiment by Professor Frances Rauscher and Dr. Gordon Shaw, the Mozart Effect said that listening to the music of Wolfgang Amadeus Mozart can induce relaxation and increase the IQ, study retention and testing-taking ability of listeners. The Mozart Effect often proves to temporarily help increase memorization so that students can receive better results on certain types of tests. Researchers think this type of music releases chemicals in the brain called neurons that help the body relax so that students can study and retain information with greater efficiency. Listen to any of Mozart’s music, including Sonata for Two Pianos in D Major, before studying or taking a test so that you can relax and increase your ability to retain process and recall information.

A test performed by researchers at the University of Texas in 1982 demonstrated how background music can help students memorize vocabulary words. The researchers separated students into three groups. The first group imagined the study words while listening to George Frideric Handel’s “Water Music.” The second group read the study words while listening to the same music as group 1, and the third group used no music at all. Students in groups 1 and 2 both received better scores than those in group 3.