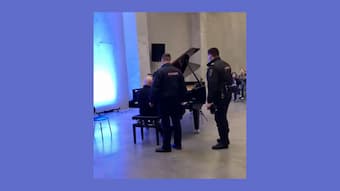 On April 14, the Russian keyboard player Alexei Lubimov and the singer Yana Ivanilova performed a concert at DK Rassvet, a venue in central Moscow which, similar to New York’s (Le) Poisson Rouge, hosts concerts and cultural events and doubles as a club. As Lubimov was performing playing a solo portion of the concert, with two Impromptus from Schubert’s D. 899 set, two uniformed police officers entered the hall, warning the audience that a bomb threat had been reported at the venue. Full story.