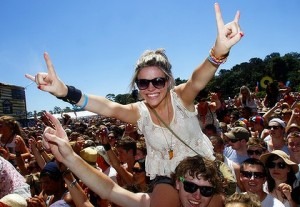 Upbeat ... concerts found to be mood-lifting.

People who go to museums and concerts or create art or play an instrument are more satisfied with their lives, regardless of how educated or rich they are, according to a new study.

But the link between culture and feeling good about oneself is not quite the same in both sexes, according to the study, published in the British Medical Association’s Journal of Epidemiology and Community Health.

For men, passive activities such as taking in a concert or museum exhibition are associated with an upbeat mood and better health, it found.

For women, though, the link is active, in that they were less likely to feel anxious, depressed or feel unwell if they played music or created art.

Researchers led by Koenraad Cuypers of the Norwegian University of Science and Technology analysed information taken from 50,797 adults living in Norway’s Nord-Trondelag County.

The participants were asked detailed questions about their leisure habits and how they perceived their own state of health, satisfaction with life and levels of depression and anxiety.

The results were unambiguous and somewhat unexpected: not only was the correlation strong between cultural activities and happiness, but men felt better when they were spectators while women clearly preferred doing rather than watching.

Even more surprising was that wealth and education were not an issue.

“After adjusting for relevant confounding factors (including socio-economic status) it seemed that cultural participation was independently associated with good health, a low depression score and satisfaction with life dependent on gender,” the study said.

“The results indicate that the use of cultural activities in health promotion and healthcare may be justified,” it concluded.

Questions remain though, about cause and effect: are people healthier and happier because they are cultured or do they seek out more culture because they feel good to begin with?