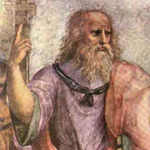 LONDON: It may sound like the plot of a Dan Brown novel, but an academic at the University of Manchester claims to have cracked a mathematical and musical code in the works of Plato.


Jay Kennedy, a historian and philosopher of science, described his findings as ”like opening a tomb and discovering new works by Plato”.

Plato is revealed to be a Pythagorean who understood the basic structure of the universe to be mathematical, anticipating the scientific revolution of Galileo and Newton by 2000 years.

Dr Kennedy’s breakthrough, published this week in the scientific journal Apeiron, is based on stichometry, the measurement of ancient texts by standard line lengths.

He used a computer to restore the most accurate contemporary versions of Plato’s manuscripts to their original form, which would consist of lines of 35 characters, with no spaces or punctuation. What he found was that within a margin of error of just 1 or 2 per cent, many of Plato’s dialogues had line lengths based on round multiples of 1200. The Apology has 1200 lines; Protagoras, Cratylus, Philebus and The Symposium each have 2400 lines; Gorgias 3600; The Republic 12,200; and Laws 14,400. This is no accident, Dr Kennedy says.

”We know that scribes were paid by the number of lines, library catalogues had the total number of lines, so everyone was counting lines,” he said. He believes Plato was organising his texts according to a 12-note musical scale, attributed to Pythagoras.

”My claim is that Plato used that technology of line counting to keep track of where he was in his text and to embed symbolic passages at regular intervals.”

Knowing how he did so ”unlocks the gate to the labyrinth of symbolic messages in Plato”.

Believing this pattern corresponds to the 12-note musical scale widely used by Pythagoreans, Dr Kennedy divided the texts into equal 12ths and found that ”significant concepts and narrative turns” within the dialogues are generally located at their junctures.

Copies of his paper have been circulating among senior scholars, who believe his argument should be taken seriously.

Dr Kennedy believes his findings restore what was the mainstream view, which held that Plato ”wrote symbolically and that if you worked hard and became wise you could understand the symbols and penetrate his text to his underlying philosophy”.

The secrecy was because Plato’s was ”a dangerous idea”, Dr Kennedy said. ”It meant that mathematical law governed the universe, and not Zeus.”

Plato’s teacher, Socrates, was executed for sowing impiety among the youth.