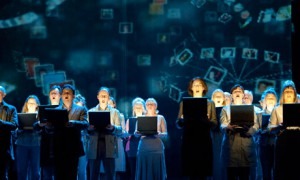 Nico Muhly's Two Boys was an opera for the internet generation, but one which also fit squarely within the opera tradition.
Photograph: Tristram Kenton

Musicals have no problem attracing young audiences, while opera does. But is their respective appeal really so different, asks Live magazine writer Laura Blumenthal

‘It’s a lack of familiarity,” Christopher Millard says. “They’re less likely to have encountered it through their lives.” Millard, head of communications at the Royal Opera House, is talking about that perennial problem facing opera companies – attracting a young audience. Whatever they do, it seems, the picture of the opera audience is fixed in the public mind: white, wealthy, ageing. Last week, Film&Music interviewed Peter Gelb, the general manager of the Metropolitan Opera in New York. By broadcasting the Met’s operas to cinemas on both sides of the Atlantic, he explained, the Met has reduced the average age of its audience, from 65, to 62 or 63. So, when Roland Taylor, the English National Opera’s director of participation, says attracting a younger audience is “very much a priority – we have got to think about the long term, and it’s all about creating the future of opera”, one might very well think: that’s all very well, but is it really going to happen?

Both ENO and ROH have large education departments to promote opera to as many people as possible. “Our work begins at school level,” Millard says “We have special matinee performances available to schools at a highly subsidised rate, as well as supplying teaching aids to support performances.” The ROH has its own learning resources on iTunes U as well as relaying its performances shown to cinema screens around the country, showing live big-screen relays for free in the summer, and offering students £10 tickets for productions that still have spare seats on the day of the performance. They even have a competition for schoolchildren to design the sound for the interval fanfare.

“I think it’s brilliant to get people into the building,” Taylor says. “But we have to go out there and get them, their parents and teachers excited about the projects because, obviously, opera is a scary word.” To help that cause, ENO has launched its Opera Squad initiative, in which its orchestra and performers go out to schools. “We don’t believe in doing things by halves at ENO. All the stuff that goes on in the building is brilliant, but taking the whole orchestra into a school just blows people away.”

Sometimes, too, programming plays a role in attracting a different audience. Last summer, ENO put on Two Boys, a new opera by modern composition’s poster boy, Nico Muhly, who’s as at home in opera houses as he is working with pop musicians such as Björk or the National. Two Boys was promoted with a video that parodied Facebook – it was clearly an opera for the internet generation. Muhly, however, is at pains to point out Two Boys wasn’t a sop to a younger audience, but fit squarely within the operatic tradition. “The way the internet works in Two Boys is really akin to the way the masked ball works in any Mozart opera,” he says. “It’s about how costumes allow us to tell one another deeper truths than in person. This is not new with the chatroom; this happens in Così and in Figaro and in Greek myths. The work is really quite traditional.”

Two Boys, he adds, “is a love story and a policier. Cyberspace is just the delivery system for the traditional operatic tropes of yearning, love, mystery.”

If anything, he says, Two Boys was probably more enlightening to opera’s traditional audience than the one it is seeking to capture: “One thing that was interesting, I will add, was exposing some of the older members of the chorus – whose relationship with the internet is less 3D than somebody my age – to the darker corners of the net. I think also it was a shock to some older members of the company the idea that people can experience emotional relationships online.”

The efforts both companies have to put into getting young audiences into their auditoriums would make one believe young people are afraid of music in a theatrical setting. That’s not the case, though. In fact, there’s a real appetite for lavish productions with a constant stream of music. They’re called musicals. Which is where Millard’s point about familiarity comes in, because that’s the thing musicals can offer. Familiar stars, from TV and pop. Familiar songs, in the form of the jukebox musicals that have proliferated in the wake of the success of Mamma Mia!. Familiar plots, either from shows that remake films – Ghost, Shrek, Legally Blonde – or get a second wind when they are turned into films themselves, such as Chicago.

The producers of musicals accept they have the advantage over opera producers because of that familiarity. “A lot of musicals are successful because they are products of movies, which people have seen everywhere in the country,” says Mark Goucher, producer of the current revival of the Gershwin musical Crazy for You, itself a jukebox show of sorts, in that it took the composer’s best-known numbers from across his career and squeezes them into one musical. “They’re known quantities, and people will feel safer with those.”

But familiarity works at a more basic level than plots, songs and stars. “I’ve never been to an opera, and neither I think have many other teenagers,” 16-year-old Adam Lynch tells me. “Whereas everyone knows what a musical is, I don’t think many people my age has ever really witnessed the power of an opera, and so go with the automatic stereotype that it’s just a fat lady singing, so it then falls immediately into their minds that it’s just rubbish and boring.”

So once again, it comes back to getting them through the door in the first place, as Kasper Holten, director of opera at the ROH, accepts: “I don’t necessarily think young people prefer musicals over opera. I know a lot of young people who are really taken by the experience of opera when they are exposed to it. I think it is very important to expose young people to a lot of different artistic experiences, and to make sure that they are not only exposed to commercial products on TV and elsewhere, or just to build future audiences, but simply to give them a rich experience in itself and inspire them: to make their lives richer. It is clear that the immediacy of expressing yourself through song and music can speak very well to younger audiences. In the end, for me, it is not a battle between musicals and opera. It’s between live music theatre experiences of any kind and the flood of senseless entertainment available to kids today. I am sure many young people can be inspired by musicals to try out opera – or the other way round. The important thing is that we make live quality experiences available to as many young people as possible, to make their lives richer and to inspire them.”