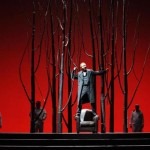 A multimillion-euro fraud investigation and an attempted suicide have added to the drama at Salzburg’s prestigious festival
A scandal of Wagnerian proportions has engulfed Salzburg’s music festival, just weeks before Sir Simon Rattle conducts the German composer’s opera Götterdämmerung, a tale of corruption and downfall that now seems particularly apt.


The week-long Easter festival has been shaken to the core after an apparent suicide attempt by its technical chief and the disappearance of the director amid allegations of a massive fraud totalling over €2m (£1.7m).

Austrian state prosecutors announced at the weekend that they were investigating eight people connected with the event on suspicion of deception and embezzlement. “We expect our inquiries to take months,” a spokesman said. “It involves non-existent companies and offshore bank accounts.”

The extent of the scandal began to unfold in early December following the abrupt dismissal of Michael Dewitte, the festival’s executive director, who is now being sought by police after disappearing without trace.

Mr Dewitte is alleged to have illicitly channelled thousands of euros of sponsors’ donations into foreign bank accounts; fiddled expenses; and paid for services which were not actually used by the festival. His alleged activities led Gabi Burgstaller, the governor of Salzburg and the festival’s official president, to describe the event as a “self-service shop”, which operated in a “self contained system”. “Someone will have to take responsibility and pay for the damages,” she said, suggesting that the scandal could stretch back as long as eight years.

Several of the methods that Mr Dewitte allegedly used to defraud the festival of sponsorship money were leaked to the Austrian press. They included revelations that he had put his wife on the festival payroll and siphoned off €300,000 into a fake company with a bank account in Northern Cyprus. He is also suspected of fiddling expenses on a grand scale: an taxi fare from nearby Salzburg airport to the city, for example, was billed at €585.

Mr Dewitte, who is alleged to have embezzled 5 per cent of all the funds donated to the festival over the past eight years had dismissed the allegations against him as “untenable “and “rubbish”.

Last week Klaus Kretschmer, the festival’s long-serving technical chief, was found lying badly injured and unconscious under a Salzburg bridge. He was relieved of his duties after he too was implicated in the scandal. Since the suspected suicide attempt, he has been kept in an artificially induced coma.

He is accused of charging the festival €700,000 for so-called advisory services allegedly carried out by a series of companies near Munich, for which he pocketed the money. Before his fall from the bridge he insisted that he was innocent. “The investigation has been against Dewitte and I am the collateral damage,” he said.

Ms Burgstaller is now also beginning to feel the heat. “She is president of the festival, but the politician claims to have known nothing because she relied purely on the information supplied by the controller and two auditing firms,” remarked Austria’s Der Standard newspaper.

The auditing firms Deloitte and Ernst & Young, which compiled annual reports on the festival, have said they were completely unaware of the embezzlement because neither had conducted a detailed audit. The allegation of fraud emerged only after the festival was subjected to a special financial investigation late last year.

The Salzburg Easter Festival was launched by the legendary Berlin Philharmonic conductor Herbert von Karajan in 1967 as a special annual concert event for the orchestra. It is one of the most expensive festivals in the world with tickets for two concerts and an opera costing €1,250 each. Sir Simon Rattle, who is one of Karajan’s successors, will conduct the orchestra during the festival which is due to open on 27 March.

There was concern that the scandal would damage the much larger Salzburg summer festival. “It is like the American bombing of Belgrade,” remarked Ioan Holender, the head of the Vienna state opera house. “They called it collateral damage. The two festivals are in the same building and have the same infrastructure. With the best will in the world, the two cannot be separated.”