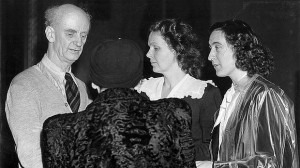 Love story: Elisabeth Furtwangler, far right, and her husband, Wilhelm, whom she defended from accusations of harbouring Nazi sympathies.

Elisabeth Furtwangler was the widow of Wilhelm Furtwangler, one of the most controversial and charismatic orchestral conductors, whose links to the Third Reich remain hotly contested. For six decades she tirelessly defended his reputation against those who accused him of harbouring Nazi sympathies.

Although Wilhelm protected Jewish musicians in Germany and refused to give the Nazi salute at concerts, the extent to which his continued presence lent prestige to the Third Reich remains the subject of much debate.

Elisabeth van Endert Albert was born in Wiesbaden on December 20, 1910. Her father, Ernst Albert, and her mother, Katarina (nee von Oheimb) were both from rich families.

Elisabeth learnt the piano as a child, but preferred the visual arts. She married young, to a lawyer named Hans Ackermann, who was killed in a shooting accident in 1940, leaving three young children and a heavily pregnant widow.

Furtwangler, meanwhile, had been living a somewhat liberal lifestyle. Before, during and after his first marriage, he fathered as many as 13 illegitimate children. By 1940, he had been seeing Maria, Elisabeth’s half-sister, for five years.

Elisabeth, after a year in mourning, was persuaded to start appearing in society again. She soon encountered Maria’s lover, later recalling that “he was as shy and quiet as a person could be”.

In 1941, Elisabeth and Maria attended a concert conducted by Furtwangler in Berlin and afterwards joined him for dinner. While Maria’s back was turned, he grabbed Elisabeth. She responded by digging her elbows into his ribs.

But her anger did not last long. The sisters visited Vienna for the New Year’s Day concert in 1942 conducted by Furtwangler, whom she now knew as “Fu”. She recalled that it was the day they fell in love and he “decided he didn’t want to be a bachelor”. They married in 1943.

Wilhelm died in 1954 and thereafter his widow devoted herself to championing both his music and his innocence. Yet even in 2005, Furtwangler’s legacy proved controversial, with the United Nations Educational, Scientific and Cultural Organisation withdrawing its support for a concert that was to have featured a Te Deum composed by the conductor.

She had lived at Clarens, on Lake Geneva, for seven decades, witnessing the rise and fall and rise again of her husband’s reputation. In 2004, she took part in Furtwangler’s Love, a documentary that gives a thoughtful account of her years at her husband’s side.

About 500 love letters between the couple were published six years ago as A Girl of 95 Years.

In 2011, Elisabeth was awarded the Ordre des Arts et des Lettres by the French government.

She had three sons and a daughter by her first marriage; she and Wilhelm had a son.