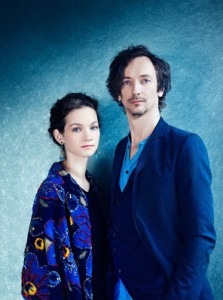 (Courtesy of The Birchmere) - Hilary Hahn and Hauschka.

Improvisation is supposed to be spontaneous. So it’s fitting that when Hilary Hahn did it for the first time, it was pretty much by accident.

Hahn, 32, is a leading classical concert violinist, a breed for whom improvisation is generally uncharted territory. If you’ve spent years focused on a written score, honing your technique to play it perfectly, it can be terrifying to break out into the unknown. The 83-year-old pianist Leon Fleisher said to me, when we were working on his memoir, that his “greatest wish” would be to be able to improvise; but despite a lifetime spent making music sound as fresh as if it had been written yesterday, he said, “I can’t improvise at all.”

So when Hahn was invited to appear at a concert by the singer-songwriter Josh Ritter, she worked out in advance how she would play along with one of his songs — a time-honored means of “improvisation” for plenty of classical musicians, particularly singers performing Handel operas. But when she came to rehearsal on the day of the show, Hahn discovered that Ritter was playing the song in a different key, and she didn’t have time to transpose what she’d written.

Thus, at the performance, Hahn was flying blind. “I walked on stage with a few ideas and my knees knocking,” she said, speaking by phone from the airport on her way to Japan, “and I played something. I didn’t break the song, and he was happy enough. It was exhilarating,” she laughed, and, for someone who had never improvised, an aha! moment: “Oh, that’s how that’s done.”

Hahn has come a long way with improvisation since. She’s toured with Ritter, appeared with other non-classical artists, and now, on Monday night at the Birchmere, she will show Washington the fruits of her biggest improvisational project yet. A couple of years ago, she was introduced to Hauschka, a German experimental pianist whose inquisitive approach to music seemed in accord with Hahn’s own probing curiosity. Over the next couple of years, they traded sound files and ideas, and they finally went into a recording studio together to see what would happen, thinking maybe they would come up with a track or two. What happened, however, was a whole album, “Silfra,” released in May, which is the basis for Monday’s Birchmere concert.

“I’d improvised along to previously existing structures, such as songs,” Hahn says. “I hadn’t improvised from nothing.” She adds, “It was just fascinating. I didn’t know where to start. You can start on a note, but then what do you do for the next note?” Rather than the classical artist trying to adapt to a non-classical style, both artists worked together “to find something that was our joint musical language,” Hahn says, “to express something that we wanted to play together.” The result certainly doesn’t sound like anything you’ve heard Hahn play before; the violin takes off in swoops and twangs and rasps, a vocabulary beyond what most concertos offer.

As for improvising: “You can just play,” she said. “Pick up the instrument and just play. That is a revelation.”

It shouldn’t be, of course. Improvisation is an integral part of many kinds of music, including, for years, Western classical music. The tradition of great musicians being great improvisers lasted well into the 19th century (think Mozart, Beethoven, Chopin). But as the Western classical canon became, well, canonical, the emphasis gradually shifted: It was more important to strive for perfection in playing existing works than to add one’s own contributions.

But Hahn’s exploration is not unique, either; today, more and more artists are searching to incorporate more interpretive freedom, more creativity, into their musical lives. The status quo of classical music “produces consistency, but not necessarily creativity,” the pianist and musicologist Robert Levin said in an interview a few years ago. Levin has spent his career working to restore improvisation to performances of classical music, improvising cadenzas in Mozart concertos as would have been routine in Mozart’s day.

One reason for a renewed focus on improvisation is the ongoing interest in performance traditions of the past: If you want to play a Handel opera the way Handel intended it, you’ll want to include the spontaneous embellishments that singers were expected to add to the repeated section of each aria. Early-music interpretation requires a certain amount of creative freedom in any case, since the scores generally don’t have the dynamic markings or expressive instructions you find in music by 19th-century composers.

“You have to look through the notation” as if it were a window, says the baroque violin virtuoso Gottfried von der Goltz, “to discover the content of the music.” The score is a signpost, pointing toward spontaneous interpretation; composers of this era fully expected that performers would take creative license (such as can be heard when Germany’s Freiburger Barockorchester, where von der Goltz is concertmaster, records Handel and Mozart operas with the maverick early-music conductor Rene Jacobs). “Improvisation is part of the essence of baroque music,” von der Goltz says.

“Improvisation” can mean different things in different kinds of music. When von der Goltz improvises a cadenza in a Bach violin concerto (his next recording comes out this fall), he is riffing on an established structure and basing his playing on a wealth of knowledge about period styles. Indeed, some early-music improvisers are not unlike jazz musicians, internalizing big chunks of the tradition and style in order to improvise freely when called for. Jazz, in fact, has some useful lessons for baroque improvisers. “When we play a French program with many chaconnes,” says von der Goltz, whose brother is a jazz pianist, “you notice how much more natural it sounds when the rhythm is slightly irregular . . . when it swings a little.”

For some other musicians, improvisation means striking out completely on your own. Gabriela Montero, a classical pianist who has made improvisation her calling card, likens it to jumping off a cliff into the unknown, “like an extreme sport.”

“I am approached so often by musicians, especially,” she says, who say, “‘My God, it must be so scary; you’re so courageous; you must have an incredible knowledge of harmony.’ No. For me it’s the easiest thing to do, and the most comfortable I feel in any part of my life.”

Montero is a perfect illustration of the way classical music orthodoxy discourages improvisation: although she improvised as a young child, she was told to stop doing it at around the age of 8. She kept it “locked away,” she says, for the next two decades. “I was not allowing myself to be myself on the stage,” she says. As a result, she started to lose interest in performing altogether. “When I was able finally to show myself as I am,” she says — in part through encouragement from the great pianist Martha Argerich — “everything clicked and made sense, and I wanted to be on stage; I wanted to share that.”

For a long time, though, she solicited suggestions from the audience when she was improvising in public, taking off on everything from “Jingle Bells” to “Moon River,” enjoying the gasps as people heard the familiar tunes transformed into a fugue, then a tango. This, of course, is the fun, party-trick side of improvisation, but she did it for a reason: When she initially tried improvising without involving the audience in this way, she said, the whole concept of improvisation was so foreign to most listeners that “the audience would literally not have any idea what I was doing.”

These days, Montero encounters more people who understand what improvisation is — in part because she’s made it so much a part of what she does (including several improvised albums). But there are still misconceptions — like the idea that improvisation automatically denotes some kind of crossover. “I am a classical performer,” she says. “When I improvise in my own style, it’s my own music; it’s a contemporary language; it doesn’t really sound like anything else.”

For classical musicians, one challenge of improvisation is that no one can tell you how to go about it — which is difficult for people who are used to having clear benchmarks by which to measure success. “I was kind of intimidated by improvisation,” says Hahn, “because I thought it had to be on the level of great jazz improvisers or bluegrass musicians.”

Can you teach improvisation? Montero says no; von der Goltz tries to do it, helping students work out a concept for approaching improvisation until they get comfortable enough to play without one. But there are also conservatory programs, such as the one at the New England Conservatory, which began as early as 1973. “A contemporary musician who doesn’t improvise,” says Hankus Netsky, the department chair, “is at a tremendous disadvantage in today’s musical world.”

Ultimately, the best way to start, according to those who enjoy it, is just to jump in.

“I don’t pretend to be a master improviser,” says Hahn. But improvisation turns out to be a way for her to “indulge a certain creative impulse that I have, within music. I was always making things as a kid. I like to draw; I like to write; it’s a stimulation that makes me happy and excited and gets me thinking about all the stuff I want to do: ‘I want to try this and try that,’ just because I made a potholder that day. I hadn’t had a way to clearly do that within music.” Improvisation, she says, offers “a kind of freedom that does lead to a certain joy of creativity.”