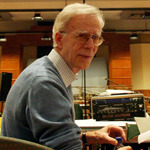 One of Britain’s leading composers is calling on fellow classical musicians to abandon the stuffy conventions that surround the concert hall and to adopt new and “blasphemous” ideas, such as amplifying the sound.


Jonathan Harvey, whose piece Dum transisset sabbatum was featured in yesterday’s BBC Proms matinée performance, is concerned that British youth are alienated by the traditions that still dictate that classical music should be played to rows of silent, seated listeners.

“Young people don’t like concert halls… and wouldn’t normally go to one except for amplified music,” he says in a radio interview to be broadcast today. “There is a big divide between amplified and non-amplified music. The future must bring things that are considered blasphemous, like amplifying classical music in an atmosphere where people can come and go, and even perhaps… and certainly leave in the middle of a movement if they feel like it.”

Harvey, 71, is one of the senior figures of classical music in Britain. A visiting professor of music at Oxford University and at Imperial College London, he has composed four string quartets, three operas and choral and orchestral works, including his Passion and Resurrection, the subject of a BBC television film. This weekend he voiced fears that if orchestras and conductors hang on to the orthodox method of performance they will end up playing to empty halls.

“Nobody should be deprived of classical music, least of all by silly conventions,” he said.

But Harvey’s views run against those of many evangelists for the timeless appeal of classical music. Julian Lloyd Webber, the cellist and brother of Andrew, is happy to popularise works normally regarded as “classical”, but believes that to routinely amplify the sound of orchestral instruments or to allow audiences to move around would be to attack a central part of the experience.

“Tinkering around with classical music in this way is not going to do what Jonathan hopes it will,” he said. “Of course I have played amplified music in concert myself, and the problem is that you are no longer in control. Even if you go through it all with the sound technicians in rehearsal, in concert you don’t really know what the audience is hearing and this takes control of the performance away from the performer.”

Innovative projects that have brought classical music into unlikely environments, such as those championed by John Berry at the English National Opera, are much more viable, Lloyd Webber believes. Berry’s company has collaborated on unconventional work with the Young Vic theatre in London, and this summer, in partnership with the avant garde theatre group Punchdrunk, the ENO took a production of The Duchess of Malfi into a London warehouse.

Lloyd Webber is happy to see music played outside old-fashioned concert halls. “They have done some experiments with playing it in nightclubs, and I think that can work very well,” he said. “You can pick up an idea of the music while you’re walking around and I think that does introduce it to a new audience. But if you were to allow people to come and go in a concert hall, you would change the nature of the whole experience.” Harvey, Lloyd Webber believes, would be throwing the baby out with the bathwater if sound systems were regularly used: “You would be in danger of losing all the sense of nuance, and that is a large part of what this kind of music is about. It is, and ought to be, a totally different experience to listening to rock music, and that could actually be part of its appeal. We should not be forced to try to turn it into something it isn’t.”

While Lloyd Webber agrees with Harvey that many people are not at home in the concert hall, he puts this down to failures in musical education. “Classical music does have a bit of a lost generation of forty-somethings who were just not introduced to music in school so do not think it is part of their world,” he said.

A potential template for the future was seen in Dorset last month. Billed as the UK’s first classical music festival, thousands of fans descended on a site outside the village of Kimmeridge to dance, drink and celebrate their favourite soprano. Visitors described scenes at the Serenata festival as being more reminiscent of a rock festival. Organisers said they wanted a more diverse audience, comparable with the folk-tinged Green Man festival in south Wales.