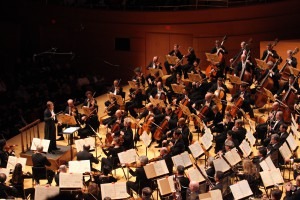 It just may be time to give up on one of the most exhausted, long-lived cliches about classical music: that it is “high” art, uniquely deserving respect and support for its greatness. Otherwise, we risk smothering the thing we love and missing avenues to pull it out of its financial doldrums.

The last few years have been difficult ones for classical music in America, if by that term you mean the fortunes of the opera houses and symphony orchestras that usually symbolize “classical.” Almost everywhere you look, organizations face budget battles, cutbacks in programming, worries about the future.

As SFCV has been continually reporting, however, renewal is arriving through the back door: smaller, more mobile groups that are light on overhead and also generally do away with one or more of the rituals that define so many classical concerts. A few months ago, the readers of Greg Sandow’s blog began to weigh in on classical organizations that were “breaking the mold” in one way or another: Choice of venue, interest in new music and in popular and world music, and discarding old rituals of presentation and concert etiquette were the common themes in that series of posts. And one of the things that most impedes our getting to that place is adherence to high art ideals.

“High” art as an idea has gone through several definitions in the centuries of writings on aesthetics, but the most current usage refers to art that is the most autonomous (individual, thought-provoking). It still heavily depends on the idea of a genius author with enormous insight, grappling with the big issues of human existence. In presenting art of this sort, performers should efface themselves, to let listeners focus on the greatness of the musical work.

An immediate problem crops up with this definition, which is that it’s too restrictive: It would probably exclude Mendelssohn’s “Italian” Symphony, Ravel’s Bolero, Gershwin’s Rhapsody in Blue, Donizetti’s L’Elisir d’amore, various capriccios espagnole or italienne, all the so-called “light classics,” and much more that features dancing, slapstick, sentiment, and moonstruck romance. The classical tradition is made of entertainments seasoned occasionally with philosophy.

You can try to liberalize the definition — for example, by declaring that classical music’s complexity and craft qualify it generally as high art, while other music is too simplistic to stimulate our brains. But this definition is significantly compromised by modern neurological studies and in the generally observed phenomenon that quite a lot of great classical musicians, not to mention numbers of eminent composers, think of great “popular art” musicians as their equals. If highly trained musicians don’t believe in the “complexity divide” and, in fact, “cross over” all the time themselves, then it’s not easy to maintain intrinsic value differences between “pop” and classical — you end up simply comparing unlike traditions and stating a preference.

Many works with high cultural prestige violate the implicit and explicit rules of high art: Think of Charles Dickens’ Christmas Carol. His little prefatory statement — “I have endeavoured in this Ghostly little book, to raise the Ghost of an Idea, which shall not put my readers out of humour with themselves, with each other, with the season, or with me. May it haunt their houses pleasantly, and no one wish to lay it” — emphasizes entertainment over the message that, in the text, the author delivers with a heavy hand and much sententiousness. Dickens was exactly right: We love this great story for itself, not for the improvement it has made in our minds. Scrooge’s nephew says as much, arguing for the value of Christmas: “There are many things from which I might have derived good, by which I have not profited, I dare say.”

In the end, the biggest problem with “high art” is that it is irrelevant to the way most of us approach culture. Most of us are looking for an emotional connection, a hit of adrenaline, indulgence in fantasy, an experience that resonates with our lives as we live them — that’s entertainment, in the wide sense of the word. Sometimes we can get that by contemplating sublime things and the deep-set psychology of human beings, and sometimes we can get it by cutting a rug.

When classical music presenters think about the value of their productions, they need to proceed from this idea of entertainment, rather than from the notion that their core audience is made up of superior human beings who are willing to forgo entertainment for enlightenment. Many of the musicians and executive directors I’ve talked to already think in this fashion, asking the question where that entertainment value is coming from, not only whether the music will be satisfactory. And if that means that “high art” distinctions are driven out of critical discourse, so much the better.