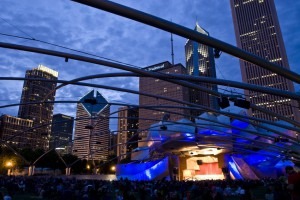 Imagine an artist who puts on clouded glasses in order to paint. Or a ballerina who adds weights to her feet. Now consider a musician who puts in earplugs: not a rock star, who’s protecting his ears from deafening noises, but a classical soloist who by comparison works in near silence, and who believes that filtering out sound leads to a more nuanced performance.

Meet pianist Steven Osborne and cellist Alban Gerhardt. They’re both world-class soloists who will be featured at Chicago’s Grant Park Music Festival, which starts Wednesday in Millennium Park. And they both consider earplugs as essential to their music-making as the instruments they play.

About 15 years ago, Osborne started to hear a quiet high-pitched noise in his left ear. It came and went; he didn’t think much of it. After a while, it seemed to move from his left to his right ear. And then, alarmingly, one day it stayed. A doctor determined that Osborne had developed tinnitus from practicing too loudly in a small room.

There’s no way to cure tinnitus, but earplugs can keep it from getting worse. Osborne was custom-fitted with a special “musician” pair of earplugs, which filter out a calibrated amount of noise while allowing other sounds to enter.

Osborne discovered that it was helpful to practice with the devices, and shared this with his friend and collaborator Alban Gerhardt, who doesn’t have tinnitus. Curiosity piqued, Gerhardt tried and liked them. He said they forced him to listen more carefully, and he found it easier to hear the “core” of his cello sound, to get to its essence.

“It’s such a big difference playing in a little room versus a big hall,” Gerhardt said. Wearing earplugs in the practice room prevents him from getting seduced by the vibrant acoustics, he said. And that helps prepare him for performances in large concert halls, with stages that can feel big, dry and unforgiving. He said, for him, wearing earplugs has closed the acoustic gap between playing in a practice room and a concert hall.

After trying them out to practice, Gerhardt decided to experiment with earplugs during concerts and recitals as well. Wearing them, he said he feels less overwhelmed by the strength and sonority of a piano or an orchestra. The devices help him balance his sound levels against the sounds being produced by others on stage.

It was only fitting that Gerhardt, who learned the benefits of practicing with the devices from Osborne, would return the favor and share his discovery about performing with them: “I told him it’s really helpful – almost inspiring – to use them. What we hear with earplugs is so unsatisfying, we’re forced to do a bit more musically.”

Osborne, the pianist, faces a different challenge in moving from the practice room to the concert hall. He said it’s partly physiological: “Playing a grand piano in a practice room makes a deafening noise, so you end up playing quieter than you should in a hall. To switch power when you’re suddenly in a hall is difficult.”

Osborne, who has a huge sound and color palette, said he felt very insecure the first time he performed with earplugs. He had no sense of the acoustics, no idea how his sound projected into the hall. But relying on positive feedback from friends in the audience, he now wears them for all performances.

They’ve changed the way he plays. Going “deeper into the keys” is only one aspect of the change. The earplugs relax him; that relaxation helps him communicate. “Professional musicians are slightly bemused at why you’d want to cut off sound, but musically it helps me a lot,” Osborne reflected. “It’s easier to get in touch with this idealized sense of music.”

He’s less aware of – and less irritated by – unevenness in the piano’s tone and volume. The body reflexively tenses when it hears a loud noise; hearing less of that noise, Osborne said, his body stays calmer and in better alignment.

Osborne admitted he doesn’t hear all of the details he’d hear without them, but he thinks he hears more like an audience member. “Without earplugs I tend to play too quietly and try to sculpt too carefully – to a level of detail that’s not meaningful to an audience. In the grand scheme of things, those little details aren’t important. What’s important is that you’re completely involved in the music. I find earplugs really helpful for that. In a strange way, it’s not the sound itself being communicated; it’s what’s behind it. How that transfer takes place is terribly mysterious, but that’s the mystery of music. If you’re relaxed, even when talking to someone, there’s a sense of connection.”

Do the two men ever play without the gadgets? Osborne does -– for about 20 seconds when testing a new hall and its piano, or until he knows what sound each gesture on the keyboard will produce. He admits it would not have been desirable to go straight to earplugs when he was a student and still experimenting with sound. And Gerhardt? Every note he plays, either in practice or in concert, is with earplugs – except when he teaches, he said – when he’s too lazy to take them in and out.