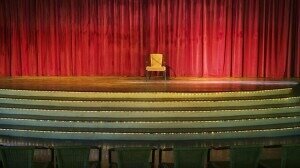 Audition. The word can unleash terror in performers of all kinds, but perhaps none more than musicians seeking to fill scarce symphony orchestra openings.

A fudged note, a slack attack, a harsh tone, a hint of hesitancy, a sagging pitch — any of these could spell the end to a job prospect.

“Today, perfection is a requirement,” says David Taylor, assistant concertmaster of the Chicago Symphony Orchestra. “You must have flawless intonation, you must be a machine.”

“If not,” says Los Angeles Philharmonic violinist Mitch Newman, “if you didn’t have a good day — after putting your whole life into getting to this moment — it could be over in a flash. It’s heart-breaking. It’s human beings doing this.”

And as virtuosos pour out of music conservatories — the Juilliards and Curtises — the stakes grow greater because the supply-demand ratio does not favor the job seeker.

One common affliction of the cellist or trumpeter is the freak-out: that moment when a contender’s nerves upset the unimpeded stream of facility developed over long years starting in childhood and filled with eight-hour-a-day practice regimens.

Those were the heady days when the term “maestro” conferred dictator status, when the likes of George Szell and Arturo Toscanini reigned.

But relying solely on one person’s word for personnel decisions had its drawbacks even back then.

One anecdote has Cleveland maestro Szell listening to a cellist warming up and announcing from his seat in the hall, “Thank you, that will be all” — before the musician had a chance to play.

Others gamed the system of autocratic rule. Cleveland concertmaster Joseph Gingold, for instance, would often sit next to Szell listening to prospective orchestra members and deliberately choose the poorer candidate — knowing that Szell would opt for the other one who was, in reality, the better musician.

There were also advantages to the more relaxed hiring practices before and during the early ’70s. But the process tightened because unions exercised great scrutiny and orchestras needed to show objectivity in their choices to avoid litigation.

Before that, says Taylor, “a player then was chosen first and foremost for his artistry, his quality of musicianship — even if he dropped a note here or there.”

A looser, less critical atmosphere was also a boon to career musicians who could, according to L.A. Philharmonic principal bass Dennis Trembly, “simply be invited to the music director’s hotel room, perform a piece of music and get a handshake.”

He remembers that after playing as a sub, the orchestra took him along on a 1970 tour to Carnegie Hall, and “Zubin [Mehta, then Philharmonic chief] called me up to say ‘congratulations’ on getting the job.”

Earlier, though, direct contact with the New York Philharmonic’s Leonard Bernstein was not so lucky. Trembly says that as an 18-year-old Juilliard freshman he auditioned “for Lenny with the recitative from Beethoven Nine and, before that, sight-read a fugue,” adding, “the word was that the upcoming spot would be mine — assuming my 4F draft status left me free.”

But when the time came Trembly did not yet have the document proving his draft status in hand, so he had to wait for another opening. One came up unexpectedly the next year, Trembly said, at a time “when I was out of practice, with rainy weather impacting my bass — all of it causing me to come unglued at the audition.”

“After I played, Lenny’s voice rang out from the dark auditorium: ‘How come you were better last year?’ I didn’t get the job.”

The opposite thing happened to violinist Taylor. Before landing his longtime position with Chicago he’d heard of an opening in Cleveland.

“On the audition date I had tendinitis in my right wrist and was thinking to cancel. But the concertmaster came to me and urged me to go, so I rested a few days and took his advice — with the idea that I didn’t have a prayer anyway because of the injury, so what the heck, play it like a performance, not a test.

“The big surprise: I got the job. Surely my tendinitis took the edge off. It was a kind of providence.”

Since then much has changed on the audition scene. There are protocols and procedures, selection committees and sub-committees, with many rounds to pass until a job offer.

“But the more they try to be fair,” says Trembly, who has sat on these panels, “the more complex and rule-bound it gets.” And it went from “here’s the music, now play it,” he says, to “go home and practice these pieces for your audition.”

From the selection committee view Newman observes that with the technical level of playing getting higher and higher, it’s “a humbling experience to be judging these musicians — because so many of them are fine players.”

Now auditions take place behind screens to ensure anonymity. For a while, tapes were sent along with résumés — before it was realized that the player may not be truthfully identified and the result might be a record spliced together from several takes. The point of it all is to make the process as fair and democratic as possible, even though subjectivity remains key.

Still, Carrie Dennis, currently principal violist of the L.A. Philharmonic, sees that cultural values differentiate European from American orchestras. She played in Philadelphia before auditioning for and winning her spot with the stellar Berlin Philharmonic.

“There it’s pretty civilized,” she says. “You don’t play this or that snippet. If you get to the second round you play a concerto — on the stage, in a hall, with all musicians in the audience.” It’s an acknowledgment of being a primary virtuoso, not an anonymous one of many in an orchestra section.

But several years before that she had an audition in Chicago that she called “a horror story.” Back then she was a violinist; when asked to play Bruckner passages she innocently requested to do “something else, which was out of the question, because there are so many rules and protocols to be followed.”

Soon after that she tried for the spot she won in Philadelphia “where they have carpets so the committee can’t even hear the sound of the auditioners’ shoes. You pick a number, you get called and herded in. It’s like a cattle call.”

Armen Ksajikian feel strongly about these performance trials — he’s associate principal cellist for Los Angeles Chamber Orchestra, Hollywood Bowl Orchestra and pinch-hits in the L.A. Philharmonic (for a record of several decades). His entrée has always been through subbing.

“That’s how the various ensembles get to know my work,” he says, “because I’m always semi-devastated from auditions and do poorly.” Even those who can realize perfection there and win the job, he adds, might later suffer what he calls “osteo-tenuritis,” falling into a less engaged manner of playing after gaining tenure.

“There’s too much self-respect that goes into the artistry of music-making,” says Taylor, “not to mention our wanting to keep up a good reputation among colleagues … and, even to this day, after 40 years of playing, I think how lucky we are, being recognized as artists before our local public and around the world on tour.”

While all that is true, the method of keeping the few big, full-time orchestras fed with top talent continues to be through rule-ridden, committee-driven, crazy-making auditions. And until someone thinks of a better system, it’s likely to stay that way.