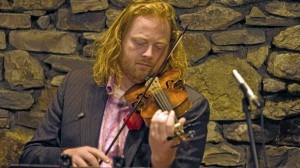 It’s late on a chilly Tuesday night in October, and Toronto’s St. Clair Avenue looks dark and deserted. But there’s live music at Dave’s, a local bar, and the place is packed.

There’s nothing strange about this picture – until you step in the door and hear what kind of music has drawn a crowd on an off night. In the centre of the room, a young clarinetist and an ad hoc string quartet are working their way through Mozart’s Clarinet Quintet.

Welcome to the revolution – the Classical Revolution, that is. Across North America, classical players are returning chamber music to its origins: informal performances among friends in intimate settings. It’s a loose network that now has a presence in many U.S. cities, including New York, Chicago and Washington, and also in a few places in Europe.

In Canada, there are branches in Toronto, Montreal and Vancouver. And the movement is currently celebrating its fifth year. (There will be an anniversary jam session Tuesday night at Dave’s.)

Credit for the founding of Classical Revolution (CR) usually goes to violist Charith Premawardhana, who organized the first CR jam session, at the Revolution Café, in San Francisco’s Mission District. But also sitting in that night was Canadian violinist Edwin Huizinga. Now that he’s back living in Canada, he’s organized a CR group in Toronto.

“I started Classical Revolution Toronto in 2010, at the Cameron House,” says Huizinga, who cultivates a scruffy biker-with-a-violin look. “For the last three months, we’ve been at Dave’s. When I moved to Toronto in 2009, I knew I had to get something going, because it’s such a beautiful thing to get musicians together to make music.”

Huizinga is a professional musician – he often performs with Toronto’s Tafelmusik Baroque Orchestra and Montreal’s Theatre of Early Music. But he’s attracted to the informality of CR’s sessions, and the range of musicians who come out to play.

“The nice thing is the way it mixes people up, with professional and semi-professional players. The classical-music world can be quite closed, in general. So this opens up situations where people at different levels can be comfortable playing together.”

That said, strong sight-reading skills are a must. And while there’s an impromptu quality to performances, the level of playing is well beyond the average amateur.

In Vancouver, the local organizer is cellist Christina Rzepa. She’s a semi-pro with a day job as a mental-health worker. Inspired by the San Francisco model, she organized a CR group in June.

We’re still getting started,” she says. “For the last little while, we’ve been playing at different venues. But our home now is the Prophouse Café.” (CR Vancouver’s next session will take place there on Dec. 6.)

“Mostly, the audience has been friends of the musicians,” she notes, “and also ‘built-in’ audiences that come with the venue. Or sometimes people will walk by and drift in. We’ve had people come in who are astounded to hear an opera singer, accompanied by a string quartet.”

There have been some Classical Revolution events in Montreal, too – at the Dépanneur Café, and a few other places. But the driving force behind the Montreal group was a flute player who recently moved to Australia, and not a lot has happened since then.

Back at Dave’s in Toronto, there’s a hockey game on the TV – but nobody is paying much attention to it. And high on a shelf, a plaster bust of Elvis looks on as a group of players sits down to play a Beethoven quartet.

Yet if the King of Rock ’n’ Roll perhaps wouldn’t know what to make of it, Liz Guerrier, the café’s proprietor, is pleased with the business Classical Revolution is bringing in the door.

“Some people said we’d be serving lots of tea when they heard we’d be having chamber music here,” she says. “But they’re drinkers – and the tips are pretty good, too.”