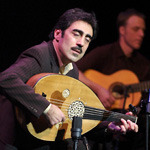 DAMASCUS, Syria — The Damascus Opera House was practically full one recent weeknight as a gathering of medical professionals from around the Arab world came together to hear the Syrian National Symphony Orchestra. The lights dimmed, and conductor Missak Baghboudarian strolled on stage to mild applause. He launched the orchestra of about 60 musicians into a rendition of the overture from Rossini’s “The Barber of Seville.”


Again, the crowd’s response was less than overwhelming.

For the next 40 minutes, the orchestra and Shaheen blended the classical music of Europe with traditional Arab sounds, violins and French horns against an oud and a tambourine.

It practically brought the house down.

Baghboudarian is leading the effort to bring classical music to Syria, and even if he has to throw in some Arabic sounds to engage his audience, it looks as though he’s succeeding.

“My experience with the Syrian audience,” he said, “is that they’re very open, very elastic. They’re curious to hear things they haven’t heard before.”

As interest in classical music has grown, so too has the competition to join the orchestra.

The opera house occupies a prominent spot in a central Damascus square. Behind high walls, it shares a campus with the High Institute of Music, which, since 1993, has fed the National Symphony Orchestra nearly all of its musicians.

The first class of 43 students entered the institute in 1990. Only 16 graduated from the five-year program.

Today, the institute has a level of selectivity that would make most U.S. colleges envious. According to the institute’s vice dean, Hussam Eddin Brimo, about 200 students apply annually for only 30 spots.

The National Symphony Orchestra, which is the only one of its kind in Syria, provides the most significant employment opportunity.

The orchestra puts on about 20 shows a year under Baghboudarian’s direction. The performances used to be free, as part of a broad effort to bring the Syrian population into the classical fold. Today, though, the orchestra charges for tickets — and still plays to full houses.

Two of the most loyal patrons are Syrian President Bashar al-Assad and his wife Asma.

“There is direct support from His Excellency, our president, and his wife,” Baghboudarian said, “which is not only for the music but for all the art. It’s important to see them supporting the music because it shows the public that this is something serious.”

Neither Baghboudarian nor Brimo hides the fact that they believe the orchestra can serve in an ambassadorial role for a country that sometimes finds itself on the diplomatic fringe.

Both men tell different stories of performances in Europe in which they were approached and asked how a “terrorist” (they both used the word) country can have an orchestra. Stories like these act only to intensify their efforts to spread their music.

Despite limited negative perceptions, Baghboudarian fields dozens of invitations every year to take his orchestra around the world. The orchestra has performed throughout the Arab world and Europe, but Baghboudarian is loath to over-commit because his priority every year is to tour domestically and bring the orchestra’s sound to Syria’s many corners.

Last year, Baghboudarian accepted a request to take a few soloists to the United States to perform alongside the Pacific Symphony Orchestra in Orange County, Calif. In addition to performing, the visiting Syrians also held classes to introduce interested parties to the music and instruments of the Arab world.

“We are interested in making a big bridge with the American people and the American culture,” Brimo said. “And we hope to make that bridge by music.”

For the orchestra to reach new heights, Baghboudarian says it needs to move off its current campus, where it is pressed for rehearsal space alongside the students of the High Institute of Music.

Preliminary plans are already in the works to find the orchestra a new space so, say both Baghboudarian and Brimo, that it can compete to become one of the world’s premier musical bodies.