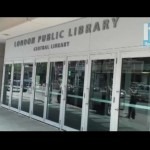 They say music is the universal language, a cultural force that unites people and speaks to the spirit.

But the London Public Library is using the universal language to deliver a tougher message: go away.

For a little over a week now, classical music and opera has poured out of speakers at the Dundas entrance to the central library.

But the dulcet tones of Antonio Vivaldi aren’t meant to attract people, but to drive them away — from the library’s front doors at least.

Margaret Mitchell, the library’s director of quality improvement, said loitering crowds of teenagers have been a problem at the central branch for years.

“People were having a difficult time getting into the library. That was the single biggest complaint we would hear,” she said.

People complained the entrance was often blocked to pedestrians as young people hung out smoking and socializing. That made entry difficult — even intimidating — for some, especially the elderly.

The problem, Mitchell said, is that the sidewalk doesn’t belong to the library, so library staff have no right to ask people to move along.

But the music, played very loudly from overhead speakers at the main entrance, seems to be clearing the crowds nicely.

Mitchell said the library hasn’t measured response to the music scientifically, but security staff have observed a notable decrease in loitering.

You couldn’t find better judges of the teen-scattering scheme than Carolyn Holme and Kim Quigg.

The pair work at the Little Red Roaster Cafe just inside the main doors to the library, where they have a perfect sightline on all the front door action.

Holme said the effect of the music was immediate.

“I came in that door and even on the first day there was hardly anybody standing around,” she said.

“(Before) they’d always be standing around and I think some people were intimidated.”

Added Quigg: “It’s a fabulous idea and it works like a charm.”

Library communications director Christina Nurse said the music is budget-friendly as well. Because the public address system was already in place, the project is essentially free.

The library has experimented with the volume has found a balance that satisfies its neighbours on the busy stretch of Dundas.

Mitchell said one business complained about the repetition — so far there are only two tunes in the repellent repertoire, a section from Vivaldi’s The Four Seasons and Voi Che Sapete from Mozart’s The Marriage of Figaro — but the proprietors were won over by the effectiveness of the tunes.

Mitchell said the library considered taking harsher measures, such as installing a Mosquito.

The device — described by its manufacturer as an “ultrasonic teenager deterrent” — produces a high frequency noise that supposedly only affects those between 13 and 25, making it a favourite of towns and cities suffering from infestations of troublesome teens.

London city staff looked into Mosquitos in some problem areas last year but council rejected their use when health and safety concerns were raised.

Back at the library entrance, the opera music might not be hostile, but it is loud, and pumped through the tinny-sounding speakers it’s a little hard to take.

After five minutes under the speakers, even Mitchell started to crack.

“Oh my god. It’s the opera now,” she said, as the two-song rotation came around to the beginning.

At 25, library patron Sean O’Connor is in the target demographic for the aural assault.

Along with some friends, he kept a safe distance from the music as he enjoyed a smoke.

“The music could be better,” he said before acknowledging, “it’s a good idea.”

He agrees it’s a good idea but he’s skeptical the plan will work in the long term.

“The kids, they’ll find a way around it,” he said.

“They’ll come down here with amplifiers twice as loud or something.”