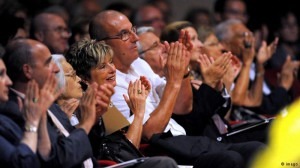 88 percent of all Germans view classical music as being a key part of their cultural heritage. But only one in five actually go to such concerts. Experts say organizers need to find new ways to reach out to listeners.

In Germany, more than 130 concert, radio and operatic orchestras make music – a variety that is considered one of a kind in the world. The German Music Council is working to get Germany’s orchestral landscape added to the UNESCO List of Intangible Cultural Heritage.

But how are things when it comes to the audiences? Over half of those under 30 in Germany do not come into any contact with classical music – neither as listeners nor musicians, according to a recent poll by the Forsa opinion research firm that was commissioned by Hamburg’s Körber Foundation.

Over 25 percent of those in this age category find the atmosphere in classical concert houses too elitist. “Too little time, tickets too expensive” were offered as reasons by more than a third of the 1,006 individuals surveyed last December for their lack of interest in concert-going – despite organizers’ active education work and cooperation with schools.

The question of how best to handle this heritage into the future was in focus at a mid-January conference titled “The Art of Music Education Vol. IV,” co-hosted by the Körber Foundation, the European Concert Hall Organization (ECHO) and Hamburg’s Elbphilharmonie. There, the take was that what groups or individuals understand as “culture” is anything but clear-cut – both in Germany and in other countries in and beyond Europe.

As principal conductor of the Orchestre Symphonique de Montreal, Kent Nagano was surprised to see that after the city built a new concert hall, the average age of the audience members dropped from 65 to a youthful 38.
Music is about reaching people directly and revealing to them that it is what we are, said the Californian, who also serves as artistic director of the Bavarian State Opera in Munich. To do so, he added, creative people must recognize how music is experienced in daily life.

Music beyond the concert hall

Kathryn Tickell, an English bagpipe player and composer, recognized that people could trace their own personal roots in society by taking up folk music.

This genre must be taken as seriously as the symphonies of Johannes Brahms, agreed Matthias Schorn, solo clarinetist with the Vienna Philharmonic Orchestra, in a podium discussion. People can only be touched by music they identify with, Schorn added, quoting the conductor Nikolaus Harnoncourt, who said, “Always play a piece as if you had just composed it.”

The Concertgebouw Orchestra’s concert house in Amsterdam has implemented an interactive livestream project intended to encourage school pupils to sing along. The aim is to reach all schools in the Netherland by 2016, announced Anja van Keulen, head of the Concertgebouw’s education program.

To help bridge the distance between musicians on stage and audiences in the concert hall, Esa-Pekka Salonen, principal conductor of the Philharmonia Orchestra in London, gave the initiative for the digital installation “re-rite,” which projects individual instrument groups onto enormous screens.

Musicians who played Igor Stravinsky’s “The Rite of Spring” with their colleagues even had cameras on their heads. Visitors to the installation, which was also shown at the construction site of Hamburg’s Elbphilharmonie concert hall, can join in on the conducting or play along with their own instruments.

In the digital world, the concert hall is taking on ever new qualities. And even if the direct live experience cannot be replaced, classical music will have big opportunities in the future to find new audiences and get them involved interactively by using big screens, tablets and smartphones.