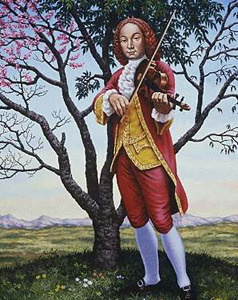 COLUMBUS, Ohio (AP) — On a recent Tuesday evening, two men were arguing on the sidewalk outside the Downtown YMCA.


As the exchange grew more heated, Sue Darby turned up the volume on a set of speakers affixed to the building exterior.

The strains of The Four Seasons prompted the opponents to walk away.

"I feel like it’s a positive approach," said Darby, executive director of the Y, at 40 W. Long St. "People don’t tend to stand around. There’s a sense of security."

Since January at the Y, an iPod loaded with classical music has played repeatedly from 6 a.m. to 10:30 p.m. daily.

The speakers on the building were donated by the Capital Crossroads Special Improvement District, which represents Downtown property owners.

Although such a soundtrack might be regarded as a pleasant diversion — a welcome cultural boost, even — by many people, another motive is at play.

The music is designed as a social deterrent.

A recent survey of Y fitness-center members revealed concerns about sidewalk loitering, which the 400 residents of the facility aren’t allowed to do. A rooming house across the street and an adjacent mental-health center sometimes exacerbate the clusters, Darby said.

Some Short North residents have come to know the classical repertoire blasting outside the United Dairy Farmers store at 900 N. High St.

Although a manager on duty said the practice, about a year old, has "done what it’s supposed to do," shopper Daveione Fluellen said he continues to see panhandlers hanging around.

Still, "It’s peaceful," said Fluellen, 20, as Mozart played in the background. Officials at the corporate offices of UDF didn’t respond to three messages left by The Dispatch regarding the music.

Cleve Ricksecker, who lives in Victorian Village, considers the classical sounds a blessing.

"They used to have what appeared to be some petty drug dealers hanging out in front" of the convenience store, said Ricksecker, executive director of both the Capital Crossroads and Discovery special-improvement districts.

"All those people just disappeared when the speakers went up."

His hunch: "There’s something about baroque music that macho wannabe-gangster types hate. At the very least, it has a calming effect."

Daniel Levitin, a psychology professor at McGill University in Montreal and author of This Is Your Brain on Music: The Science of a Human Obsession, said reactions depend on people’s tastes.

When he used scanners to monitor brain activity, a subject’s amygdala — the part of the brain governing emotions that can initiate a fight-or-flight response — was triggered after hearing music perceived to be unpleasant.

Whether one dislikes classical works or classic rock, Levitin said, audio aversion is far more innate than, say, negative visual stimuli because "there isn’t much you can do to get out of its way other than moving yourself."

Strains of opera and choral tunes have permeated a city train station in Portland, Ore, for more than two years — resulting in a reduction in service calls for help, The Oregonian reported. Similar success has been noted by small businesses in Seattle.

In New York, a public-spaces planning group touted such sounds as a boost to "overall ambience" at the city’s Port Authority bus station.

And, in Minneapolis, classical music was added last year to a troublesome light-rail vestibule as part of a "suite" of upgrades that included better lighting, security cameras and an increased police presence.

John Siqveland, spokesman for the Minneapolis Metro Transit system, said the situation has improved. Although he couldn’t quantify the direct effect of Beethoven, he called the aural component "fast, cheap and easy."

One rider, he said, sent email to request the playlist.

And, he added: "It’s impossible to determine one type of music our passengers would like or dislike."

What might it say about society when fine arts are used as a weapon?

The Columbus Symphony declined to comment. So did folks at classical radio station WOSA (101.1 FM).

But Timothy Russell, the outgoing music director of ProMusica, sees the debate from both sides — with an opportunity, he hopes, for an unintended outcome.

"First of all, I am always happy when people are listening to classical music," said Russell, who is set to retire this summer after 34 seasons, "but I am sorry if people want to use it as a social deterrent.

"Part of me might hope that they actually just sit around and keep listening."