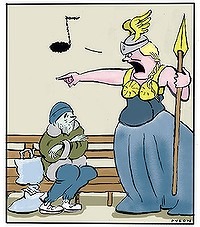 For some, this art form has an exalted purpose, but now it’s being used to fight crime, control crowds and punish pupils.

Some months ago, I was sitting at the Port Authority bus terminal in New York with enough time on my hands that I noticed the music coming over the speakers in the ceiling. It was the scherzo from Schubert’s first piano trio. Schubert’s piano trios are among my favourite pieces in the universe, but as I listened I found that I wasn’t relaxing; quite the contrary. The music sounded awful: tinny, hard-edged, aggressive. I wanted to get away.

I’ve long heard that the Port Authority is one of many public spaces across America that use classical music to help control vagrancy: to drive the homeless away. Listening to that Schubert rendition, I started to believe it.
Advertisement: Story continues below

To many people, classical music is the perfect background music: soothing, attractive, undemanding. But for some time it’s also been used as a form of crowd control: a kind of bug spray for people you don’t want hanging around. Early attempts in this direction date to the mid-1980s when a 7-Eleven began playing music in its car park as a deterrent to the crowds of teenagers congregating there.

Plenty of stores continue to use the technique, and other examples have cropped up sporadically ever since. In 2001, police in Florida blasted Mozart and Beethoven on a crime-ridden street corner and saw incidents dwindle dramatically. In 2010, a transit authority in Oregon began playing classical music at light-rail stops, and calls to police dropped. When the London Underground started piping classical music into its stations in 2005, physical and verbal abuse by young people declined by 33 per cent. A school in Derby, England, got into the news last year by using classical music to punish misbehaving pupils, forcing the disobedient to sit and listen to an hour of classical music. Behaviour improved by 50 per cent.

Like many things in classical music, these endeavours have entered the realm of conventional wisdom without being adequately studied. Installing speakers in a public space to play classical music usually involves some degree of physical improvement to the area and an increased police presence. How, then, can you determine that classical music alone is responsible for improving conditions? And can you really play classical music non-stop on city streets?

The idea of classical music as a force for good fits right in with the widespread image – among classical music lovers, at least – of this art form’s exalted purpose. Classical music is often presented as a panacea. It can calm patients during surgery. It can socialise inner-city children and turn them into brilliant musicians (witness the El Sistema training program in Venezuela, which spawned conductor Gustavo Dudamel and a half-dozen other rising young stars). It can make you smarter (the so-called Mozart effect, which led to an unfortunate wave of bowdlerised music-for-babies CDs and videos starting in the 1990s). And now, it can fight crime, fulfilling its traditional elitist role by separating all of us good people who love classical music from the great unwashed, who flee like cartoon villains from the very sound of it.

There’s a kernel of truth to all of these suppositions. And all of them go back to a fundamental idea that this non-verbal art form has subliminal powers that can influence us in ways we aren’t quite aware of or can’t quite control.

Yet, using classical music to fight crime is not tapping into classical music’s inherent powers as much as its social attributes. Playing music in any space redefines that space, much as painting a mural on the side of a building affects the space around it: it is transformed from a no man’s land to a place with an identity, a kind of self-awareness. And music, perhaps more than any other art form today, is a tool of self-identification. For many people, especially young people, the kind of music you like is intimately related to how you dress, whom you hang out with, who you are. If the music that’s playing in a given space is not your music, then the space is not yours either.

Indeed, playing classical music to clear out public spaces is an act of supreme elitism: an attempt to ”civilise” a space by making it unpleasant to people whose tastes differ from your own.

There’s nothing new about this use of music, nor is it limited to classical music. What we’re actually talking about is Muzak. Muzak sets out to improve the image of public spaces and, even more to the point, tap into music’s subliminal powers by inducing specific moods in its listeners, moods that will supposedly put them in the properly receptive frame of mind to consume whatever it is the space in question is selling.

By putting classical music in public spaces, stores and local authorities are effectively marketing those spaces and trying to induce people to behave more like model citizens. But in this context, the line between ”classical music” and ”Muzak” often becomes sketchy. If one thinks that Muzak is the default source for many of the places using classical music in this way, people’s aversion to it can be seen in a different light.

Recorded music in a public space has become a commodity, not an art. That people experience it as repellent may say little about their actual interaction with the music. When you’re passing through a space such as a bus terminal, music, however pleasing or noxious, tends to blend into the background. When you’re sitting still in the same space, the sound demands your attention – particularly when it’s a sound as dramatic as the Schubert trio.

According to a Port Authority spokesman, the terminal plays classical music to please travellers, not to control vagrancy. But in that windowless, ugly space, with pigeons strutting across the grimy floor, announcements blaring unintelligibly over the loudspeaker and the sound system giving the music a harsh edge, as if impaling it on a jagged chunk of metal, my sympathies were all with the homeless people that such music is widely thought of as attempting to repel. If I’d had a choice, it would have driven me away, too.