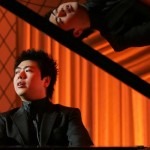 THE richest headhunt in classical music has ended with the world’s most coveted pianist switching teams at a critical moment for the industry. Lang Lang, 27, has signed with Sony Classical for $US 3 million ($3.4 million), says an executive at his old label, Deutsche Grammophon.


The Chinese musician is credited with an explosion of music teaching in his country, where more than 40 million children are said to be taking private piano lessons.

He has been a star in the West and an Elvis-like figure at home since he sold out Carnegie Hall, performing the Grieg concerto at the age of 19 in 2001. He was mobbed on his first return to Beijing with the Philadelphia Orchestra that year.

Since he released his first record in 2003, Lang Lang has regularly topped the classical charts and, on occasion, achieved sales of pop music dimensions. In a specialist genre where releases sell in a few hundreds, Lang Lang sells in the hundreds of thousands.

Opening the Beijing Olympics, he was watched by more than 5 billion viewers and achieved bigger worldwide recognition than any classical hero since Luciano Pavarotti.

A piano manufacturer created the Lang Lang Steinway. The Prince of Wales asked him to perform the premiere of a concerto he had commissioned in memory of the Queen Mother.

At the rarefied Deutsche Grammophon, which shelters such media-averse pianists as Martha Argerich, Maurizio Pollini and Krystian Zimerman, Lang Lang’s noisy populism was never an easy fit. When he demanded the dismissal of Yundi Li, the first Chinese winner of the International Fryderyk Chopin Piano Competition, the label acquiesced immediately, according to a dissenting producer. (Yundi Li has put a softer spin on his departure.)

Last April the new chief of Sony, Bogdan Roscic, was given an open chequebook and told: “Get Lang Lang'”.

With Lang Lang’s transfer Sony has scored a blow against the market leader. At stake is the last frontier for Western classical music, the burgeoning middle classes of east Asia.