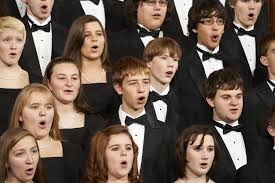 Researchers at the University of Gothenburg have ascertained that singing in a chorus, in unison, causes heartbeats to synchronize. Their project, called “Kroppens Partitur” or ‘‘The Body’s Musical Score,’’ also showed that singing in a chorus has as much of a health benefit as yoga, again because the breathing and thus the heart rate is regulated.

Their method was to monitor the pulses of heart rates of 15 singers in a chorus, all 18 years old, as they hummed, chanted, and sang.

The results showed that, in all three, breathing and heartbeat became synchronized. “When you are singing, the heartbeat for the whole group is going up and down simultaneously,” the authors are quoted as saying by the BBC.

“It gives you pretty much the same effect as yoga breathing. It helps you relax, and there are indications that it does provide a heart benefit.”

It makes sense: generally, choristers breathe at the same points in the music. “When you are singing, you are singing on the air when you are exhaling so the heart rate would go down,” writes Dr. Bjorn Vickhoff, lead author of the study. “And between the phrases you have to inhale and the pulse will go up.”

"Singing regulates activity in the so-called vagus nerve which is involved in our emotional life and our communication with others and which, for example, affects our vocal timbre. Songs with long phrases achieve the same effect as breathing exercises in yoga. In other words, through song we can exercise a certain control over mental states.”