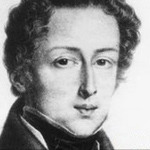 The composer Fryderyk Chopin, who was hounded by hallucinations during his relatively short life, probably had epilepsy, say Spanish researchers.


The Polish pianist died in 1849 at the age of 39 as a result of a lung disease which has recently been attributed to cystic fibrosis.

But the Spanish doctors say he probably also suffered from temporal lobe epilepsy.

They cite reports of disturbing visions which the composer experienced.

Letters written by Chopin himself, as well as the memoirs of those close to him, describe the visions that invaded his life.

In her memoirs, his lover George Sand recalled various times when Chopin experienced visual hallucinations, including during a trip to a monastery that was “full of terrors and ghosts for him”.

In a letter written to the daughter of George Sand, Chopin himself describes a moment, during a performance of his Sonata in B flat minor in England in 1848 at a private salon, when he saw creatures emerging from his piano which forced him to leave the room to recover himself.

Hallucinations occur with several medical and psychiatric disorders, including schizophrenia, but they usually take the form of voices rather than visions.

The most likely explanation for Chopin’s visions, say the Spanish doctors, is a form of the medical condition epilepsy called temporal lobe epilepsy.

With seizures of this kind it is common to experience strange visions and intense emotions, such as those described by Chopin.

They acknowledge that the composer also took the opium-based tincture laudanum to quell his various physical symptoms.

But they rule this out as the cause because of the quality of the visual hallucinations he experienced as well as the fact that he started having them long before taking this medication.

Migraine with aura is another possible cause that they strike off the list because Chopin’s visions were too brief.

Dr Manuel Varquez Caruncho and his team acknowledge that without the aid of modern day tests, it is difficult to make a definitive diagnosis.

But they told the journal Medical Humanities Chopin’s illness could easily have been overlooked by his doctors because there was limited understanding of epilepsy at that time.

They added: “We doubt that another diagnosis added to the already numerous list will help us understand the artistic world of Fryderyk Chopin.

“But we do believe that knowing he had this condition could help to separate romanticised legend from reality and shed new light in order to better understand the man and his life.”