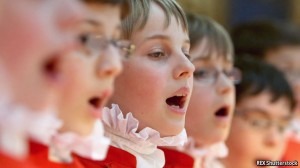 REALITY television shows such as The X Factor may have forged the likes of One Direction and JLS, but it is from choirs that the next generation of male heartthrobs will emerge. Die Prinzen, one of Germany’s most popular pop bands, consists of former pupils in the St Thomas Choir of Leipzig. So does the internationally-celebrated Amarcord, a classical group. The Choirboys, a British boy band, consists of two former trebles at Ely Cathedral and one from Southwell Minster. The members of Elliot Minor, a punk group, met as trebles at York Minster.

In Latvia, a choral superpower, all members of the boy band Carnival Youth met as choristers; two in the Riga Cathedral Boys’ Choir and two at their school choir. “It was just a way of having fun,” Roberts Vanags, the keyboardist, says of their early days as a band. “Choir gave us the skills to make music together.” Those skills have reaped rewards for Carnival Youth, which has gained a large following across Europe. They released their second album, “Propeller”, last month. Full story.