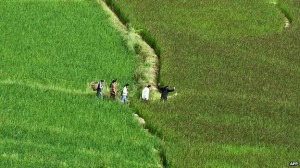 Farmers in a village in East China’s Fujian Province have claimed that Buddhist music playing in the fields has helped them to increase their rice production.

Output in Liangshan village went up by 15% after residents installed 500 lotus-shaped speakers in the rice paddies to engulf the crops in a wave of soothing mantras, the Global Times newspaper reports. Local authorities say the musical rice fields also yielded larger grains, while the silent paddies with no music suffered from pests.

There’s no scientific consensus on the effect music has on plants, but researchers at the China Agricultural University have backed the experiment, saying certain sound waves – such as those found in the rhythmic chanting of mantras – can stimulate the pores on a plant’s leaves to help absorb more sunlight. “Only positive music aids growth, while rock music would probably harm it,” a local agriculture officer says.

Not everyone agrees with this assertion. Last year, Chris Beardshaw, one of Britain’s leading gardeners, announced that playing a constant diet of heavy metal helps flowers to bloom. He said an experiment he conducted showed that a continuous playlist of Black Sabbath songs worked wonders on a greenhouse full of plants.