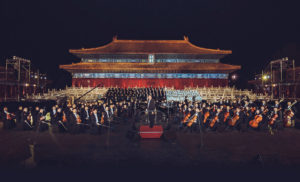 We have long been told that China holds the key to the future of classical music. As the West looks increasingly to the East, what impact will this have on the global musical community and the music we listen to?

You don’t have to walk far in Shanghai’s French Concession before encountering a billboard image of an illuminated vintage light bulb set on an elegant wooden plinth. It is a marketing campaign from the Shanghai Symphony Orchestra, informing citizens of the world’s second most populous city that electric lamps were first used here in 1879 – the very year the orchestra was established. ‘Illuminating the city since 1879’ is the slogan, drawing attention to the SSO’s 140th season. Neat, even if it feels a little out of step with the audience I join one Sunday night in January and whose appetite for technology probably doesn’t stretch to its history. All around me are millennials hungry to hear pianist Haochen Zhang’s Rachmaninov and then post about it on Snow, the Chinese intranet’s answer to Snapchat. Full story.