Media
Children’s Programming at Bayreuth: Wagner, of Course, and They Love It
August 16th, 2010
Tags: opera 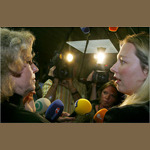 BAYREUTH, Germany — There is a general and mostly well-founded perception of the Bayreuth Festival as an elitist stronghold for opera, as much a shrine to Wagner as a festival of his works. And there is no ticket harder to come by. Wagner-lovers wait an average of 10 years to get a coveted ticket to the Festspielhaus, which seats only about 2,000.


The new co-directors of the festival, Eva Wagner-Pasquier and Katharina Wagner, who are half-sisters (and Richard Wagner’s great-granddaughters), are determined to make it more people-friendly and open. Last summer, in a new venture, the festival presented the first offering of Wagner for Children, which offered a playful mini-production of “Der Fliegende Holländer,” trimmed to 60 minutes.

On Tuesday afternoon, a couple of hours before “Lohengrin” began at the main house, the festival presented the last of 10 performances of this summer’s Wagner for Children offering: a 70-minute, irreverent and completely charming production of “Tannhäuser” directed by Reyna Bruns. It took place in one of the rehearsal halls for an audience of roughly 200, mostly children, including many very young children. I have seldom been among an audience of such delighted operagoers.

This was no run-through with singers and a piano, but a proper performance of excerpts from the opera played by 29 members of the Brandenburgisches Staatsorchester Frankfurt, led by a dynamic young conductor, Hartmut Keil, and featuring a large cast of gifted younger singers and a chorus. The tenor Jeffrey Dowd brought a robust voice to the title role and looked endearing in his ragtag shirt and dingy jeans. Some of the cast members are also in the main festival productions. (The singers who performed Elisabeth and Venus are also appearing as Valkyries in “Die Walküre.”)

In this production for children, the opera began with a made-up spoken dramatic scene. We see young Tannhäuser and fellow minnesingers in what looks like a barracks getting ready for bed. Tannhäuser is strumming his ukulele, making up a melody that will later become his impassioned love song to Venus. An officer then pops into the barracks and tells everyone to pipe down. “Lights out!”

When, after a break during which we see the Young Shepherd in the opera pass by (here the soprano Christiane Kohl, dressed as a newspaper delivery boy on a bike), Tannhäuser encounters Venus. She is not a sexpot, but an urban party girl, played by the mezzo-soprano Alexandra Petersamer. Her hair is a riot of various colored braids, and she gets around on a skate board. She starts calling Tannhäuser “Tanny,” and he cannot resist her sassy vitality. Her gal-pal friends play with what look like the tails of exotic serpents and keep huge spiders as pets. I was not exactly sure what this all meant. Still, the kids squealed with delight.

The virtuous Elisabeth, the soprano Sonja Mühleck, is portrayed as a sensible young woman who works in a computer lab, represented by black walls dotted with 1’s and 0’s, which Elisabeth nimbly moves around. Children in the audience were frequently invited to take part, helping to move sets, or holding props during the song contest. Once, when Tannhäuser asked himself out loud (in German, of course), “Where did I put my crayon?,” a little girl in the audience volunteered, “It’s in your hand!” Which it was.

This was not just fun with “Tannhäuser,” but also a real mini-musical performance. The big arias and choruses were performed, including the “Song to the Evening Star,” beautifully sung by the baritone Marek Reichert as Wolfram. At the end, when Tannhäuser, having completed his pilgrimage to Rome to atone for his sins and win Elisabeth’s blessing, joined in the angelic final chorus, the doors to the rehearsal room were thrown open, revealing afternoon sun, leafy trees and some confused-looking passersby on the grounds of the opera house.

The performances are free for children and also for a parent bringing them. If two parents come, then one pays 20 euros (about $26). This is to foster audiences that are mostly children. The tickets can be secured in advance, and they disappear, Katharina Wagner said in an interview, as soon as they go online.

After this “Tannhäuser,” the cheering ovation went on for 10 minutes. Venus was the favorite, which is not exactly the message, many would say, we are supposed to take from the opera. But who cared?