Media
Children need to hear the sound of music
May 2nd, 2012
Tags: education 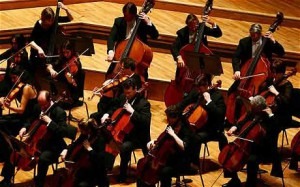 It is best to hook children on music
in their early years. credit : Alamy

An early dose of Mozart can aid concentration and creativity – so what are we waiting for?

Nelson Mandela said that if the cultural life of a country is strong, then its soul is strong. In which case, what on earth should we make of Britain, where recent research tells us that 40 per cent of our children have never visited an art gallery and 60 per cent of them have never heard live classical music? What must our collective soul be like?

Expanding our children’s cultural horizons shouldn’t just be a preoccupation for the self-obsessed middle classes. Nor should orchestral music be the preserve of the elite. Studies show that a developing brain benefits hugely from exposure to the music of the great composers. In a school for children with ADHD, Mozart was actually found to cut racing heart rates and boost concentration. Not only that, it improves cognitive function and increases creativity. So why are we isolating our children from its miraculous effects?

The great Hungarian composer and music educationalist Zoltan Kodaly wrote: “If a child is not filled at least once by the life-giving stream of good music during the most susceptible period – between age six and 16 – it will hardly be of any use later on.” And here lies the rub: if you haven’t been inspired by music in your formative years, by going to concerts and learning to express yourself through an instrument, you probably never will be. And thus the door closes.

In 2009, I launched a music festival in Somerset, a sort of Glastonbury meets Glyndebourne experience (orchestrainafield.com) to which all and sundry, oldies, teens, and even younger ones were invited. A huge part of our audience had never heard an orchestra live before and to say they were changed by the experience is an understatement. I still meet people who talk about that live orchestral onslaught with a kind of evangelistic zeal. It was the same when I took an orchestra north, to a rather bleak industrial town. There we played for 500 or so teenagers who had never heard such music, and we touched them in a way they will never forget.

As people today connect with each other by electronic means, such moments of communal musical witness become increasingly rare and ever more important. Inter-generational, classless experiences barely exist. There was a time when music was made across the generations in church or home. But we no longer go to church and there are fewer and fewer focal community points. This is why I want to demolish the restrictive bourgeois conventions that have grown up around classical music.