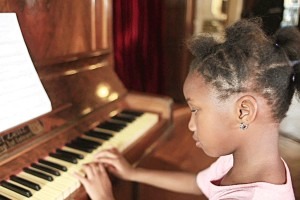 A young girl playing music on a piano

The old age adage of New Year’s resolutions was thrust upon me the other day by this 10-year-old wearing designer alpargata shoes who is determined to learn to play a musical instrument this year. “My resolution this year is to become a famous musician; uncle, do you think I am still too young to learn to play the piano?” he asked me.

I told him that he was too late. “Look at Michael Jackson. He began his career as lead singer of the Jackson 5 at the age of five. As for me, by the time I was your age, I had learned how to play the guitar and was already in a band.” Full story.