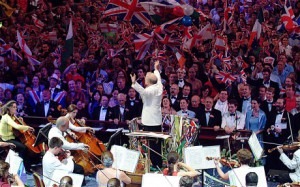 The BBC has produced a report warning that musicians playing in its orchestras are at risk of damaging their hearing
Photo: ALAMY

Musicians in the BBC’s orchestras have been told to chew gum and sit further apart to avoid damaging their hearing in new health and safety guidelines.

To their fans, the symphonies of Mozart and Beethoven are serene and soothing – and a night at the Proms is a pleasure.

But to the BBC, it seems, they are a health and safety hazard.

The corporation has produced a report warning that musicians playing in its orchestras are at risk of damaging their hearing, and even their health, by working in a noisy environment.

It acted after European Union rules were brought in to limit exposure to noise in the workplace.

Now musicians in its five orchestras have been told they should think about using ear plugs, chewing gum and – in a new interpretation of the term musical arrangement – sitting further away from other members of the orchestra.

The advice is contained in a 50-page report which comes after a three-year study by the BBC’s in-house safety adviser.

It warns that trombonists and trumpeters are exposed to decibel levels approaching those given off by chainsaws, an average of 92 decibels.

Other musicians are also warned of the hazards they face: during a three-hour session, a horn player, for instance, is exposed to the equivalent noise of a half hour journey on a motorbike, while for an oboist it is the same as an hour spent on a London Underground train.

Last night musicians questioned whether the report chimed with their experience.

Peter Adams, a principal cellist with the English String Orchestra, said: “The tendency of musicians to do a lot of drinking at the end of concerts is surely a greater risk to health.

“Certainly, if you are sat next to the brass section it can be very loud and people do take precautions but using chewing gum – I don’t think that would look very good from the audiences’ point of view, or on the BBC cameras during the Proms.”

One of the most common problems reported by musicians is tinnitus, which results in a ringing, buzzing noise that can interfere with sense of pitch.

Possible causes include noise exposure and stress. A clenched jaw is also recognised as increasing the risk and the guidance says some violinists chew gum to keep their jaw relaxed, though adds “this may not be appropriate on stage”.

Recommendations for reducing the harmful effects of being a concert musician or member of a BBC choir include using a screen to separate parts of the orchestra during practice, sitting further away from other musicians and using ear plugs.

Unexpected sources of danger are identified in the report. Quieter instruments but higher-pitched instruments present problems.

Members of the orchestra in the “upper strings” – the violins and violas – are told they “need to be protected from piccolo (especially)” who sit behind them.

It also warns that musicians may not find their colleagues contributing to their own inner harmony.

“For a musician, the sound of your colleagues’ instruments may well contribute to increased stress levels,” it says.

Even their own playing can be stressful: “The adrenaline rush you thrive on in performance can turn under certain circumstances to unhealthy stress that is associated with raised blood pressure, compromised immunity and changes to metabolism.”

It has been written by Ruth Hansford, the BBC’s safety advisor, and has been issued to the corporation’s choir BBC Singers, as well as players in its five orchestras.

Roger Wright, controller of BBC Radio 3 and director of the Proms, said: “The BBC is a significant employer of musicians. As an organisation it therefore has a duty of care towards them, not least to help them to look after their hearing.”