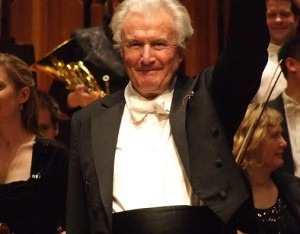 Celebrating his 85th birthday later this year, Sir Colin Davis has been one of Britain’s best-loved conductors for more than half a century. The death of his wife, Shamsi, in June 2010, was a severe blow to him; since then, his activities have slowed. “I don’t have the energy I used to,” he remarks. “After performing a big piece, one feels one should be put out to grass, like an old donkey.”

Still, he has no intention of stopping. Next month, besides conducting Weber’s opera Der Freischütz with the London Symphony Orchestra, of which he is now president, he will be at the Incorporated Society of Musicians (ISM) conference for an event dedicated to his life and work.

His most coruscating views are reserved for the near tyranny currently wielded over 18th-century repertoire such as Bach, Haydn and Mozart by “historically informed performance” specialists. He is concerned that many symphony orchestras have been scared away from some of the greatest music ever written.

“I think those people hijacked that repertory to give themselves something to do,” he says. “The way they play Baroque music is unspeakable. It’s entirely theoretical. Most don’t play the music because it’s moving, they play it to grind out theories about bows, gut strings, old instruments and phrasing. I’ve heard Bach especially mangled, as though he has no emotional content.

“Roger Norrington plays Berlioz’s Requiem without any vibrato – it must be a foretaste of purgatory! And John Eliot Gardiner can be horribly theoretical. People may say: “Well, in those days they didn’t play it with vibrato.” But perhaps if they had, they would have preferred it.

“Besides, to play such vocal melodies without vibrato doesn’t accord with what was written,” he points out. “Geminiani [1687-1762] wrote that you should play the violin as if it was the most beautiful voice. I’ve never heard a voice sing with no vibrato. It doesn’t make sense.” How would he ensure a strong future for classical music? “Relatively simple things, like making sure every child is musically literate,” says Davis, “as the Hungarians used to. It could be done, if anybody had any imagination. The LSO and other orchestras do what they can, taking instruments into schools, trying to get kids interested.”